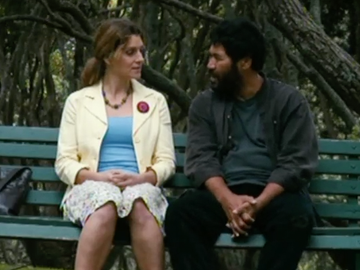 The Insatiable Moon is the tale of a man with nothing but wisdom, joy and possibly a direct line to God. Arthur (Rawiri Paratene) wanders the streets of Ponsonby, where he finds perfection (Sara Wiseman) just as his community of boarding house friends faces threat. Producer Mike Riddell first wrote The Insatiable Moon as a 1997 novel, inspired by people he met while he was a clergyman in Ponsonby. The film’s extended development almost saw it made in England with Timothy Spall - before finally coming home, “on half a shoestring and a heap of passion”.

Made for Montana Sunday Theatre, Dead Certs provides rare starring roles for talents Rawiri Paratene and Ginette McDonald. Paratene won a Television Award for his acting, and also co-wrote the script (with director Ian Mune), which he began writing on a Burns Fellowship. Paratene plays Hare Hohepa, whose dreams of a winning bet that will allow him to escape his down'n'out existence take an unusual turn: his friend Martha (McDonald) expires after some drinks, then returns in ghostly form to encourage him to keep betting. So begins a dream run at the TAB.

Taking in depression and prosperity, this edition of the Kiwi social history series explores the boom and bust cycles of the economy. Stories include TJ Edmonds, of baking powder fame, who made his fortune by hawking his wares around Christchurch before opening his iconic factory. Factory workforces expanded, and with them unions. Worker dissatisfaction with pay and conditions led to the Queen Street riot of 1932, a defining moment in NZ history retold here by protest leader Jim Edwards' son. Edwards’ real estate agent granddaughter is also interviewed. After years of success manufacturing shoes, employing struggling members of the South Auckland community, and feeding hungry kids with the proceeds, entrepreneur Karroll Brent-Edmondson hit hard times in 1998. This 70-minute documentary follows Brent-Edmondson as she attempts to get her business back on track, and avoid liquidation, under the guidance of a committee led by Dick Hubbard. Brent-Edmondson was named 1995 Māori Businesswoman of the Year, and went on to feature in Top Shelf documentary A Hell of a Ride. She passed away in June 2006. Aged 50, Jean Watson sold her Wellington house to buy land for a children’s home in southern India. In 2013 filmmaker Gerard Smyth (director of acclaimed quake chronicle When a City Falls) spent two months in India, chronicling Watson and some of the many lives she has changed. Smyth’s documentary also harks back to the 60s, when Watson wrote novel Stand in the Rain, and hunted crocodiles with Barry Crump. The result won solid audiences at the 2014 NZ Film Festival. The Listener gave it four stars; “Unpretentious but unashamedly enjoyable” said The Dominion Post. In this intimate documentary painter Michael Smither lays bare his life — from a stern Catholic childhood in New Plymouth to the inspiration of Central Otago to his senior years in Otama Beach, collaborating on natural artworks. Smither is best known for his unflinching portraits of family life, works like 'Sarah with Baked Beans' which capture the untamed energy of small children. Smither acknowledges the hardship behind these famous paintings, and the toll it took on his first marriage. Ex-partners (including novelist Rachel McAlpine) open up about their time with Smither. After tackling documentaries about sporting legends and surveillance, Kiwi director Justin Pemberton (Chasing Great) began his most ambitious project yet. Inspired by the brick-sized bestseller by French economist Thomas Piketty, Capital in the 21st Century examines the disproportionate amount of cash and power wielded by a small global minority. The French-Kiwi co-production blends talking heads (including Piketty and Nobel Laureate Joseph Stiglitz) and pop culture imagery of the rich and famous. Jean-Benoît Dunckel (from French duo Air) supplies the music. In late 1769 Captain James Cook first reached New Zealand, charged with charting the area. Peter Elliott chronicles Cook's journey in this award-winning four-part series. This first episode looks at his first encounters with local Māori, on the east coast of the North Island. While some greeted Cook with pōwhiri, others took exception to the murder and kidnapping the Europeans brought in spite of their declarations of peace. Amongst the locals Elliott meets on the coast is a young sailor in Tauranga who bears a striking resemblance to America’s Cup winning sailor Peter Burling. When gold fever hit Central Otago in the late 19th century, hundreds of Chinese immigrants were among the hopeful prospectors. They were a quiet community scraping a living in harsh conditions, hoping to save money for families back home. This report for Contact follows the work of archaeologist Neville Ritchie, who in 1981 led one of Aotearoa's "biggest archaelogical operations" yet — an excavation of Cromwell's Chinatown, the makeshift village left to nature after the last miner died. It was part of wider research of the area, before new dams put some of the history underwater.