This animated series stars a shed of friendly machines who live on Murray and Heather’s farm near Kumara Cove. In this episode Beaut the Ute goes through a midlife crisis when he meets a younger ute — Flash — in town, and worries his time might be over. But the machines soon learn that a slick new number plate isn't everything. The colour palette of this animated series makes it clear that the machines are the characters that matter. The show is narrated by broadcaster Jim Mora (Mucking In), who created it with Brent Chambers.

We don’t want to preach at children, but underpinning all the episodes are values – hard work, pluck, determination, kindness, generosity. If the world was like Ferguson Farm we would have no problems at all. Mind you, Beaut th’ Ute is a problem – he loves looking at himself in the mirror, he’s vain and insecure. So we don’t totally ignore the real world!
– Jim Mora As: Beaut the Ute 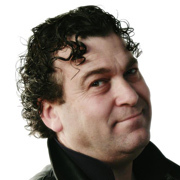 Sir Ed drives a tractor to the South Pole