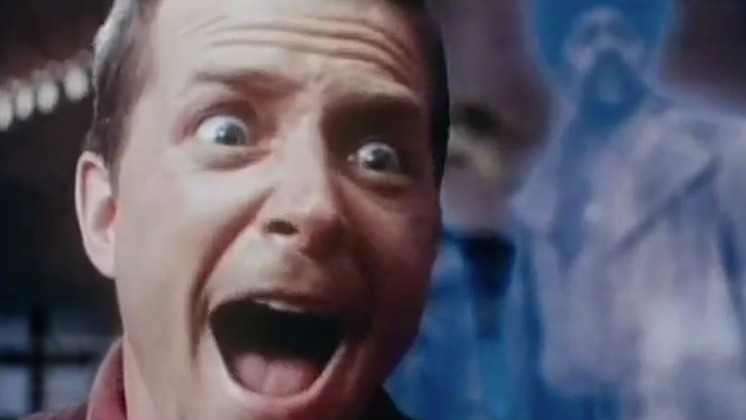 After the critical and art-house success of Heavenly Creatures, Peter Jackson's next feature returned to the playful mix of comedy and horror that had made Jackson's name - only this time he was working on a larger scale, with Hollywood stars and backing.

Some audiences and critics weren't sure how to take the shift after he whet their arthouse appetites with Heavenly Creatures. But those who were familiar with Jackson's filmmaking roots were more receptive to the film's charms, particularly genre fans.

In a year (1996) that was noted for bloated, formulaic thrillers such as Twister and Independence Day, The Frighteners was praised for its originality and deft blending of genres. What starts out as a playful mix of slapstick and supernatural brouhaha, delivers a genuinely hair-raising finale. Nigel Floyd wrote in Time Out UK: "Once again, Jackson proves he's one of the most innovative filmmakers currently working in the fantasy genre."

Reception from local audiences mirrored the mixed worldwide response, although there were some glowing reviews. "This is frenetic, gleefully demented fun," wrote Matthew Grainger in The Dominion.

In many ways, The Frighteners hit its target. The film ably proved that top-shelf special effects could be achieved outside of Hollywood, and on a relatively small budget: US$30 million. The year it came out, the film contained the largest number of digital effects ever used in a feature. Grainger again:

"While the computer-generated ghosts and ghouls look absolutely staggering, the narrative itself offers enough fast-paced twists and turns to render The Frighteners not only the most efficient scare machine since The Evil Dead, but also the most inventive and accomplished movie of the year."

It was an effective calling card for Weta, the company Jackson had co-founded in 1994 during the making of Heavenly Creatures. With his own special-effects studio based in New Zealand, Jackson was able to establish the working model he would use for all subsequent film projects: Hollywood funding coupled with local crew and expertise.

Unlike successful New Zealand directors who went before him, Jackson didn't need to leave the country to grow his career.

Jackson and partner Fran Walsh also retained a great deal of creative control on The Frighteners, which is evident in the gleefully dark script they co-wrote. In fact, it's easily one of the funniest New Zealand films ever made.

One scene depicts the decrepit ghost Judge having his way with a mummy in a museum exhibit, after which he jokes that he likes it, "when they lie still like that."

Now that Jackson has established a career known for diversity, which enables him to alternate between comedy, fantasy and straighter fare, The Frighteners seems like a natural fit within his wide-ranging oeuvre, but the risk he took with such a divergence almost didn't pay off. Box-office for The Frighteners was disappointing, which shows what a gamble New Line took when they handed over the reigns on Jackson's next project, The Lord of the Rings.

Another Jackson film made for Universal Pictures

Peter Jackson was involved with this film

John Blick was cameraman for this NFU doco