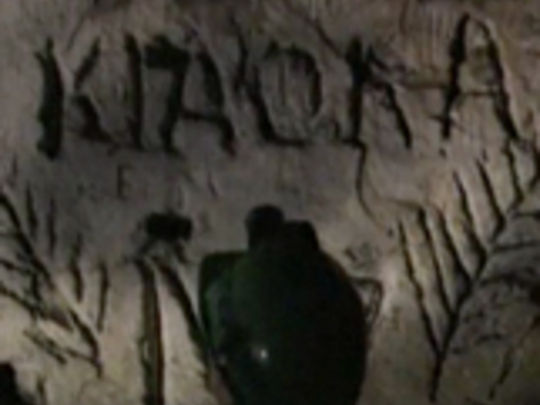 The silent film The Civic Reception of Lieut J Grant VC (1919) is one of the nuggets in the World War I Collection compiled by NZ On Screen. It shows the arrival in Hawera of one of its returning heroes, Lieutenant John Grant, VC on 29 October 1919. It was filmed by the local cameraman who was also the projectionist at the local cinema where it would have been enjoyed by the town, most of whom seem to appear on film.

We see Grant being escorted through the streets by the Fire Brigade Band, of whom he was a past member. The film also shows Grant meeting and shaking hands with two other local heroes, one of whom is Lieutenant Harry Laurent, VC, who had received a similar reception from the town in July 1919.

In 1914-1919 similar films were being shot and shown at local cinemas throughout New Zealand showing the boys going off to war, the wounded returning and finally, the boys coming home, but included with this were fundraising carnivals, processions and from 1916 onwards, the Anzac Day services.

At present the New Zealand Film Archive is negotiating the return of further New Zealand films taken of New Zealand soldiers, sailors and airmen overseas that are held in the Pathe and Gaumont collections, many of which were originally taken by Henry Sanders and Tommy Scales, the official New Zealand film cameramen, who were on loan from Pathe News and returned to work for it after the war.

Excerpts of these films can be seen in the first episode of The Years Back series (1973), but unlike World War II – which gets three episodes – the doings of New Zealanders in World War I get crammed into a single episode covering Gallipoli, Sinai and Palestine and the Western Front, and it suffers accordingly. Even so, there are riches in the voice-overs because some of those filmed during the war were still alive and interviewed for the series.

New Zealanders went to war with no expectation or understanding of what was to come on Gallipoli, and in the campaigns in Sinai and the Western Front.

They found themselves in unimaginable situations, having to endure the worst that warfare and the technology of machine-guns, artillery, and poison gas could offer in a battlefield that the same technology had turned into a wasteland. How they endured is captured on film.

In World War I New Zealand sent 100,444 soldiers and nurses to war out of a population of just over one million in 1914. We suffered 18,166 deaths and 41,317 wounded out of an eligible male population of men of military age of 243,376. The impact on New Zealand society was deep and lasting.

Why did they go? It is important to look beyond the message and look at the faces in the footage. Obligation, mateship, curiosity, community expectation, and a chance to see if one has what it takes, come through as the universal reasons for going to war (and ultimately conscription eliminated choice).

The 'Join Together' promo for the 1990 Auckland Commonwealth Games sees behind-the-lines soldiers from various 'British Empire' nations lay bets to see who is the fastest. After racing they pledge to “do this again sometime eh brother” (referring no doubt to the shared joy of competition, as opposed to 1,115,597 Commonwealth war dead).

What kept them there? In two films directed by his grandson, David Blyth – Our Oldest Soldier (2002) and French Connection (2011) – Curly Blyth tells of his experience as a young New Zealand officer, simply doing his job, because the job had to be done (the enemy or nit-picking military bureaucracy be damned).

I did one of the interviews with Curly in Our Oldest Soldier and I regret that some of the interview did not make the final cut, such as when he spoke of marching over the Hohenzollern Bridge into Cologne after the Armistice in December 1918 and the soldiers of the New Zealand Division stopped mid-stream, unbuttoned and pissed into the Rhine, fulfilling one of the promises that sustained them in the trenches!

That same pragmatism is seen in Gallipoli: The New Zealand Story (1984). I was military researcher for the film and together with Maurice Shadbolt did the veteran interviews. It was a humbling experience because they bared their souls to the camera and the film shows how dreams of glory and the big OE changed to one of learning to survive with the hope of one day perhaps coming home to New Zealand.

This theme is repeated in Falls the Shadow (2010) and Our Lost War (2006) – stories of New Zealanders who went to war and endured, because a job had to be done and there was no coming back until it was over. What strikes one throughout the films is the constant theme of young men too busy doing their job to be afraid.

Hope also underpins Poppy (2009), a based-on-a-true-story award-winner that uses modern digital storytelling to immerse viewers in the grim reality of the battlefield.

Pioneer Women – Ettie Rout (1983) reminds us of the many remarkable women who worked with the soldiers as nurses, VADs, canteen workers, ambulance car drivers, and in providing assistance to the local communities turned into refugees by the war.

Ettie had the quiet support of the New Zealand military authorities in England and France because they recognised the practical pragmatism of what she was doing to limit the spread of venereal disease, despite the New Zealand public branding her a scarlet woman for encouraging their boys into sin and depravity.

Perhaps the most remarkable film in this collection is Tolga Ornek’s Gallipoli - The Frontline Experience (2005). It moves beyond the exploration of the evolution of nationalism that was the prompt to Gallipoli: The New Zealand Story and looks at the universality of the wartime experience to both sides, British, Australian, New Zealander and Turk facing each other in the trenches at Gallipoli.

I remember a hectic 48 hours flying into Istanbul, being driven down to Canakkale to be interviewed by Tolga, who I realised had read and thought about everything I had written on New Zealanders and Gallipoli. When I spoke to the other historians brought in from all over the world – they said the same thing – his documentary absorbed all our stories – the irony being that he was taken to court by far right groups in Turkey because his documentary was not Turkish enough – it was too universal and not the paean to Turkish nationalism that they expected.

Tolga told it as it was and this is a stunning achievement. This is why this collection is important: so that each generation can make its own voyage of discovery as in Children of Gallipoli (2001).

There is much yet to add to this evolving collection – the brilliant work being done by Māori Television each Anzac Day, far-flung archive footage, and more recent documentaries bringing to life wartime stories nearly a century on, such as George Andrews' Journey to Arras (1997) that explores the achievements of the New Zealand tunnellers who created an underground city in the lead-up to the April offensive in 1917 ...

Meanwhile the films launching the collection – nuggets of remembrance picked from the bloody mud and dirt of experience – allow us to glimpse ourselves; to see New Zealanders as they were and provide us with the opportunity to wonder about who we are.

Dr Christopher Pugsley is a New Zealand military historian and author. A former New Zealand Army officer he recently retired from his post as a Senior Lecturer in War Studies at the Royal Military Academy Sandhurst and has returned to Waikanae Beach where he continues to write.