Competing canines on primetime TV invoke memories of the heyday of A Dog's Show in this TVNZ series. Tux was presented and produced by dog lover Mark Leishman, with his faithful golden Labrador companion Dexter (until the latter's death in 2000). Jim Mora provides a genial and pun-filled commentary as obedience tests and obstacle courses challenge the teams of dogs, and exasperate (and occasionally delight) their owners. Titbits come in the form of dog lore and trivia, advice from pet psychologists and canine funniest home videos. 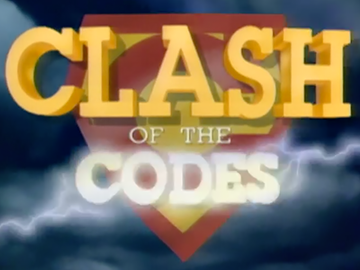 Clash of the Codes was a show that pitted teams representing various sports against each other in a series of physical challenges (obstacle courses, mud runs and stair climbs etc). In the made-for-TV battle for code bragging rights the traditional heavyweights (rugby, rowing) were challenged by strivers from the newer codes (eg. Olympic canoeing champ Ian Ferguson, Coast to Coast multisporter Steve Gurney, and young then-unknown triathlete Hamish Carter). Four series were made; the first three were hosted by Simon Barnett and the last by Robert Rakete.