This first episode of this 2013 crime drama begins with a meth-fuelled bank heist gone very wrong. Harry is a troubled Samoan-Kiwi detective (played by Oscar Kightley, a million miles away from bro' Town) pursuing justice in South Auckland. Sam Neill, in his first role on a Kiwi TV series, plays Harry’s detective buddy. Off the case, Harry struggles with his teen daughter in the wake of his wife’s suicide. The Chris Dudman-directed series screened for a season on TV3. Broadcaster John Campbell tweeted: “Not remotely suitable for kids. But nor are many excellent things.” Two tadpole-like creatures with enormous eyes chase each other around, to a driving techno soundtrack. Then these digitally-animated characters find themselves plunged into a different reality - one where a single wrong move could mean they exist in only two dimensions. After completing this mind-warping mini-rollercoaster ride, creator James Cunningham and producing partner Paul Swadel worked together on bank robbery tale Infection, which won invitation to the Cannes Film Festival. 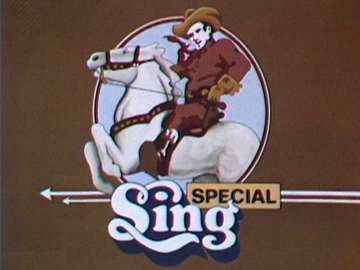 This end of season Sing special from 1975 takes place mostly in the Wild West. After some song and dance numbers and comedy, we meet two small-time crooks: Lone Wolf (Ray Woolf) and Crazy D (Laurie Dee). A musical showdown at the saloon ensues — featuring a Tom Jones medley — before a bungled bank robbery brings down the burglars. The performers include Craig Scott, Chic Littlewood, Angela Ayers and George Tumahai (who shows Woolf how to hongi). The show also contains a rare clip from A Going Concern, an early NZ soap of which no known episodes survive.