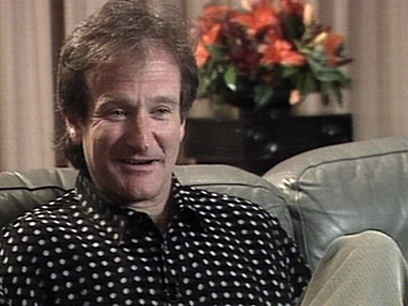 In this interview publicising 1996 comedy The Birdcage, Robin Williams turns his humour settings to a surprisingly low level. Quizzed on matters political by Holmes reporter Ewart Barnsley, Williams argues that politically correct people can display the “same kind of repressive tendencies” as others, and admits that the portrait of homosexual parents in the Mike Nichols-directed comedy could be offensive to both gays and straights. But, he adds, the majority of viewers "go and laugh their ass off and find some common ground and humanity in it”.

I get political...when I see people being ignored, or people being denied their human rights. When they try and write the constitution on the Etch A Sketch, when they try and reverse and deny people freedoms, I become political. I don’t care whether it's Democrat or Republican. Sometimes you can get the same kind of repressive tendencies from the extreme left, you can get politically correct people getting very angry.
– Robin Williams, on being asked if he is a political person Another comical story of gay and straight