An excerpt from episode one of this series.

An excerpt from episode four of this series.

An excerpt from episode nine of this series.

An excerpt from episode 13 of this series.

The Real Story Behind the Truth

In the beginning there was a Chinese meal...

I have never been involved in the creation of a show where I was able to be absolutely precise about the where, when, why, and what amount of time (plus how much alcohol) it took to conceive.

Firstly where: An early evening dinner which extended seamlessly to a late supper at a Chinese restaurant in Fort Street, Auckland. Around the table were A K Grant, David McPhail, Jon Gadsby, Ann Williams and myself.

The time: May 1990, the initial flash of the idea came moments before the arrival of the spring rolls and mandarin pancakes with the entire concept "fleshed out" so to speak over the lemon chicken, pork cooked in BBQ sauce, Mongolian lamb hot pot (house speciality) and special fried rice (A K Grant's choice to absorb the alcohol). By the time lychee and ice cream was served we knew we had a winner and spent the rest of the evening congratulating ourselves on our wit and brilliance with copious beverages. Fortunately Ann wrote down most of what was said and a four page outline was written the following morning.

And the most interesting, the why: Four weeks previously the original TV3 had gone bust, which meant that Letter to Blanchy had been canned, leaving McPhail, Gadsby and A K Grant without work. My company Isambard, which besides producing Blanchy had three other series slashed, was owed a vault size amount of money. I came to an agreement with the receiver that we have the TV3 OB van for 18 months without charge and I could use it as collateral against NZ on Air investment, plus at least 36 hours of TV3 air time in the following 18 months. This meant we could wander down to Wellington, with a time-slot, broadcaster backing, and a chunk of "in kind" finance. Issues was the first show to get made this way.

We produced our first 26 episodes for TV3, till the by-then Canadian-owned company and a new commissioning editor canned the show. So we switched - in just 24 hours - to TV2, and in the third season over to TV One. After a disagreement with TVNZ we went back for two more seasons with TV3. In all 134 shows were produced. An interview with Martin Crowe

Social satire from the era

Rima Te Wiata was a judge on this 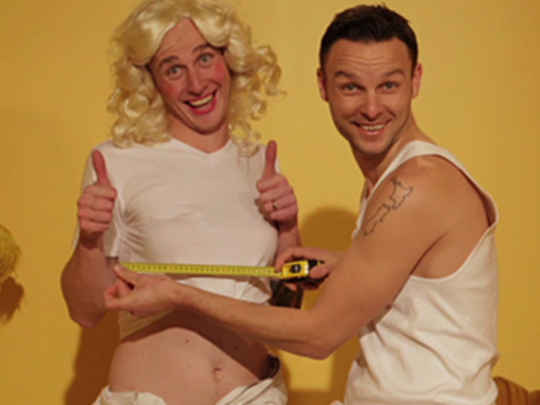