A short excerpt from Series One.

The credits from this episode of series one.

This series follows the interconnecting lives of eight 20-something characters — one of them dead — as they search for happiness. An ambitious 'meta' concept, strong performances from the ensemble cast and stylishly-shot Wellington locations won the Gibson Group drama awards and acclaim, particularly from its targeted youth demographic. In this excerpt from Chapter Eleven, Lindy accepts a job in Toronto but fails to tell boyfriend William; Barry and James discuss Chaos Theory and relationships; and Sam uses flowers in an attempt to fix things with Tina.

Chaos theory: A butterfly's wing can change the state of the atmosphere so what the atmosphere does diverges from what it would've done. So in a month's time, tornado hits Indonesia. I read about it at the checkout.
– Barry (Spencer Greenham) The Insiders Guide to Happiness follows the... The sequel to this series

Also set in Wellington and about 20 somethings

The story of Rinpoche, the Kiwi Buddhist High Lama 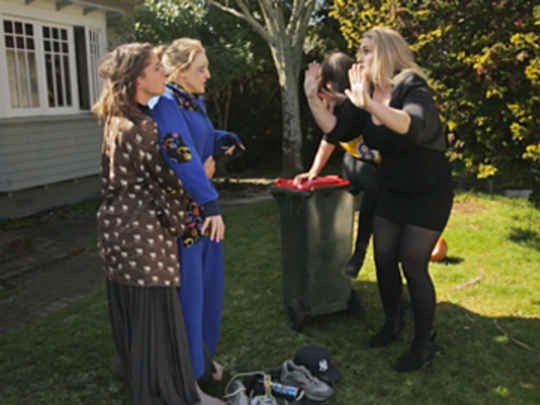