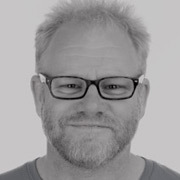 Dunedin-born Brian Challis studied at Canterbury University and the NZ Film and Television School, and began making films with his friends: Scott Wills starred in both 1998 short The Hole (which was invited to 15 film festivals) and no dialogue follow-up Ouch. Since then Challis has mainly directed commercials, plus occasional TV shows (Nigel Blows Stuff Up). He also has varied film projects in development.

My main reason for doing it was the challenge of telling a story without words. Brian Challis, on making 1999 short film Ouch