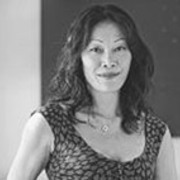 Model Geeling Ng found fame after a memorable beach scene with David Bowie in the video for 'China Girl'. Auckland born, of Chinese ancestry, Ng went on to act in 'glitter soap' Gloss and Chinese settlers down under classic Illustrious Energy (1987). Her recent screen appearances include playing boss on The Jaquie Brown Diaries, competing on Dancing with the Stars, and hosting a cooking segment on Asia Down Under.

It just opened a million doors. Ng, on appearing in the video for David Bowie song 'China Girl'