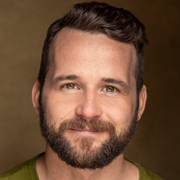 Hayden J Weal has directed and starred in two features. In time-twisting romance Chronesthesia (2016), he plays a barista dealing with strange messages and odd coincidences. He followed it with Dead (2020), in which he plays a murdered cop out to solve his own death. Weal co-wrote the zombie comedy with comedian Tom Sainsbury, and later recut it into a web series. Weal also starred in vineyard rom com Hang Time, as a man dumped just days before his wedding. He was Martin Freeman's body double in the Hobbit movies. Back at school in small-town Te Awamutu, Weal told his guidance counsellor he wanted to work in film.

When it comes to writing something or making something, I want to watch something that sets me on fire. Hayden J Weal, in a September 2021 interview Hayden J Weal: on making movies, and the magic of Marty McFly