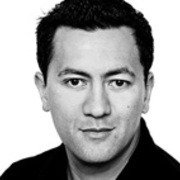 After studying acting in Whangarei, Rob Mokaraka won a Best Newcomer Champman Tripp acting award for 2001 play Have Car, Will Travel. On screen he was part of the ensemble cast in acclaimed Māori Battalion tale Tama Tu, and Paolo Rotondo-directed short The Freezer. Mokaraka and Rotondo would later collaborate on award-winning play Strange Resting Places, a tale of Māori and Italian bonds during World War ll. The second season of comedy web series The Māori Sidesteps sees the now established band (who still work at Pete’s Emporium) facing a plethora of absurd challenges. Hoani questions his heritage and joins another, much whiter, band, Jamie faces marriage trouble, and Lemmi’s Samoan roots leave him in very hot water. Meanwhile Riki faces delusions of living in the Old West, Kelly gets the band an uncomfortable booking at a “birthday”, and Dollar$ faces competition as the band’s manager from the enigmatic Maui (Te Kohe Tuhaka). Tired of working his go nowhere job at Pete’s Emporium in Porirua, Jamie (Jamie McCaskill) persuades some of his workmates (Cohen Holloway, Rob Mokaraka and Jerome Leota) to form band The Māori Sidesteps. Throughout this web series they find themselves at inopportune gigs, deal with interference from their over-reaching manager Dollar$ (Raybon Kan), and face an early band break up. Luckily the band is reinforced by Jamie’s brother Kelly (Erroll Anderson), who joins as a fifth member — outshining several other auditionees (including Jemaine Clement). Tired of being portrayed as "the shy one, the dragon lady or the prostitute", three Chinese-Kiwi female actors turned the tables and starred in their own web series. JJ Fong, Perlina Lau and Ally Xue teamed with director Roseanne Liang (My Wedding And Other Secrets) to create flatmates comedy Flat3. It began in 2013 on the smell of an oily rag. A Kickstarter campaign raised $10,000 for the second season, then NZ On Air put $100,000 into the third. Guests included Rose Matafeo and Madeleine Sami. Flat3's three stars (and Liang) returned for 2016's Friday Night Bites.

Described as a "Māori Twilight Zone", Mataku was a series of half-hour dramatic narratives steeped in Māori experience with the "unexplained". Two South Pacific Pictures-produced series screened on TV3; a later series screened on TV One in 2005. Each episode was introduced by Temuera Morrison Rod Serling-style. The bi-lingual series was a strong international and domestic success; producer Carey Carter: "Our people are very spiritual ... and here we are ... turning it into stories so that the rest of the world can get a glimpse of that aspect of our culture."