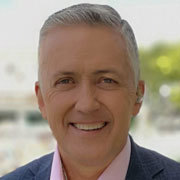 Stephen McIvor is a veteran of Kiwi sports broadcasting. After working as a radio announcer in the 1980s, he joined Sky Sport when the channel first went to air in 1990. Over the next two and a half decades he covered primarily motorsport and rugby league — as well as tennis, cycling and "just about every sport imaginable". McIvor left Sky in 2016. He has been an anchor for coverage of two Rugby World Cups, the 2010 Winter Olympics and Commonwealth Games,, and the 2012 Olympic Games. In 2021 the official America's Cup website named him as its commentator and anchor for the 36th cup, held in Auckland.

When I was in Hamilton I worked for a guy who ended up being one of the first producers at Sky, he asked me if I wanted to do some voice work and it all began from there, on March 18, 1990. Stephen McIvor describes how his sports television career while working as a radio announcer, Sunday News, 14 September 2014