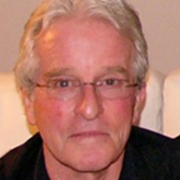 He got hold of us and pretty much completely reorganised us. Jon Gadsby, on how he and David McPhail benefitted from Spitz's promotional talents