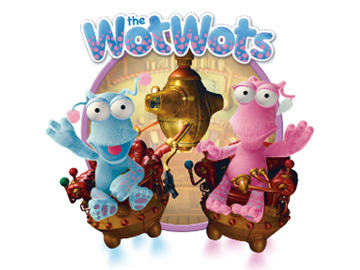 SpottyWot and DottyWot are young alien siblings exploring life on earth in this made-for-wee-kids TV series. In each 10 minute episode, the CGI-animated SpottyWot (blue) and DottyWot (pink) inhabit live action environments, like the zoo and the beach. The show was the second production (after Jane and the Dragon) for Pūkeko Pictures, a partnership between children’s author Martin Baynton and Richard Taylor and Tania Rodger (of Weta Workshop and Lord of the Rings fame). Two series were made of the Annie-nominated show, and it screened around the globe. Like the eponymous native plant this children's puppetry programme stuck to the socks of many kiwis of a certain vintage. Produced in Dunedin by TVNZ's Natural History Unit (now independent production company NHNZ) Bidibidi followed the adventures of a sheep on a South Island station for two series. Bidibidi was adapted from the children's book by Gavin Bishop. Each programme interspersed puppet scenes and musical numbers with the expected first-rate NHU-shot footage of birds and other animals that Bidibidi meets en route, from kea to skinks and bitterns.