The Grand Final of this 1996 musical talent quest series Showcase was hosted by Ian Fraser. The nine finalists perform songs from Mozart on guitar, to 'Everything’s Gonna Be Alright'. The opening act is Akustik Fungi: Jason Kerrison, one half of the duo, would later find fame as singer for chart-topping band Opshop, and return the favour as a judge on New Zealand’s Got Talent. The Showcase judges are Sir Howard Morrison, actor Rima Te Wiata, Dame Malvina Major (who performs) and Eddie Rayner (who got his break on TV talent show New Faces, while part of Split Enz). Showcase was a popular mid 90s TVNZ talent quest, in which broadcaster Ian Fraser hosted a search "to find the very best" emerging musical talent. Filmed at Avalon Studios, this viewers' final from 1996 sees nine finalists compete for the public phone vote (there was a separate studio judges’ final). Songs range from Stevie Wonder and Sister Sledge covers to classical standards. Shona Laing, who got her break on a TV talent show, guest performs. Competitor Shaun Dixon went on to train under Pavarotti, and married another finalist from this episode, fellow opera singer Tania Brand. 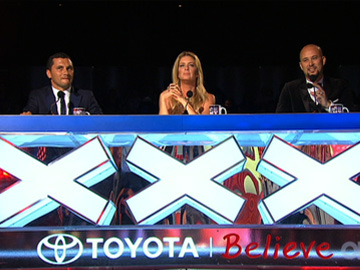 TV One gave Aotearoa the chance to show it’s ‘got talent’ via two top-rating series of the UK-spawned format. This excerpt from the final of the 2013 season is the opening segment, where the last of the finalists are found, and host Tamati Coffey introduces the  judges: model/actor Rachel Hunter, musician Jason Kerrison and international guest, choreographer Cris Judd (J.Lo's ex). The performers, ranging from a hip hop dance crew to an opera singer, compete for a Toyota RAV4 and $100,000 cash. The eventual winner was Renee Maurice from Wellington. This Kiwi version of the Got Talent franchise scoured Aotearoa "on a mission to find a star". Topping the weekly TV ratings, the TV One series was hosted by weatherman Tamati Coffey, with Rachel Hunter, musician Jason Kerrison (Opshop) and UB40 frontman Ali Campbell as the judges. In this opening excerpt of the 2012 final, the last two contestants are chosen: people’s choice Dudley Fairbrass, and judge’s choice Logan Walker. They join 10 other finalists — including eventual winner, 15-year-old Clara van Wel from Blenheim — to compete for $100,000 and a Toyota Corolla. The very last grand final of Homai Te Pakipaki sees ten finalists from across the motu come together to sing their hearts out, with the hope of taking home a $20,000 cash prize (plus phone package). Broadcast live, the raw talent karaoke contest is hosted by Brent Mio and 2008 series winner Pikiteora Mura-Hita, with help from Pakipaki veteran Te Hamua Nikora. The winner is decided by whānau, iwi and the viewers at home via text vote. The guests include 2014 winner Lee Stuart, band Sons of Zion and IDentity Dance Company. There are also short clips of past show highlights. The first New Zealand final of The X Factor features emotional highs and lows, and judge's compliments aplenty. Three young singers made it through in 2013: Whenua Patuwai, Jackie Thomas and Benny Tipene. All would achieve NZ top three singles within weeks of the final. Among the highlights of the 95 minute special: Tipene's acoustic version of 'Hey Ya!', Patuwai's 'A Change is Gonna Come' and Thomas's emotional last number — not to mention the showstopping opening: Daft Punk's 'Get Lucky', featuring 13 finalists, an acrobat, and two dancers wearing mirrorball heads.