TVNZ's long running religious and choral music programme visits Christchurch's Anglican cathedral. Before its devastation by earthquakes, it was the centre of the city and one of the most celebrated of its great Gothic buildings. It could also claim to be "the most visited, the most accessible and best known church in New Zealand". Host Graeme Thomson explores the cathedral, its chapels and bell tower and outlines its history. He interviews Dean John Bluck and introduces hymns and songs of praise sung by the cathedral's choir and an ecumenical congregation. This documentary looks at Christchurch-based experimental theatre company The Clinic. Since 1999 the group has been making concept-driven works - "idea[s] stemming from a dream, a conversation, or even a costume". Often characterised by global multimedia collaborations performances might take place in abandoned buildings, nightclubs or online. This excerpt explores the genesis of the company and their free-flowing ethos. It features The Peculiar Case of Clara Parsons and a show in development at Christchurch Cathedral that includes writer Jo Randerson.

The opening track from the second Jean-Paul Sartre Experience album indicates a significant change in tone for the band — more layered and expansive, and less angular than some of their earlier recordings. The video was directed and edited by John Chrisstoffels, who shot the stained glass windows and tile mosaics in Christchurch's Anglican Cathedral. JPSE vocalist and bass player Dave Yetton created the pulsing and spiraling video feedback effects. The band appears only fleetingly — in individual close-ups, filmed off a television screen by Chrisstoffels.

This documentary follows the Vintage Car Club of New Zealand on a 1985 commemorative tour. On 24 March 1985, over 90 vehicles and their owners gathered in Invercargill to honour a century of motoring. Then the Vauxhalls, Chevrolets and Fiats embark on a reverse Goodbye Pork Pie as the lovingly-restored vintage cars head from the deep south all the way to Cape Reiga, meeting Prime Minister David Lange en route. A rare directing credit for veteran cameraman Allen Guilford, Milestones is narrated by John Gordon, who swaps A Dog's Show commentary for motoring trivia. 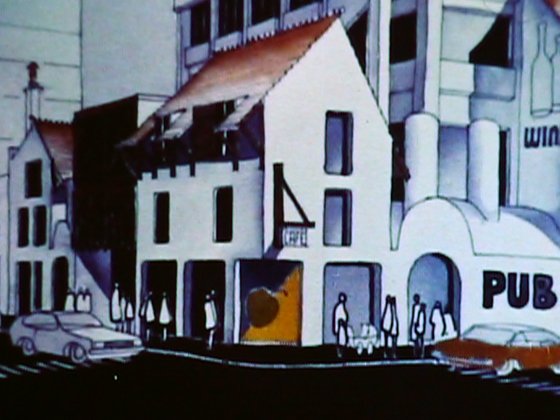 This edition of the long-running National Film Unit magazine series goes from south to north, then loops the loop. In Christchurch the cathedral and its history are toured and a service for Queen Elizabeth II is shown. Then there’s international get-togethers: a “Jaycees” congress in Rotorua; then Massey, for a Grasslands Conference. At Milson Aerodrome legless British war-hero Douglas Bader is amongst the attendees at the world’s first International Agricultural Aviation Show, and top-dressers demonstrate their “need for speed” skills above a hill country farm.