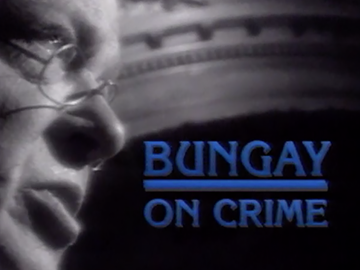 Leading criminal barrister and QC Mike Bungay offers a lawyer’s perspective on nine of New Zealand’s most notable police investigations and criminal trials, in this series of dramatised documentaries. In each episode, Bungay explores a different legal theme and they include circumstantial evidence, forensics, immunity deals and the validity of confessions. Featured cases include the Margaret Bell 'Mainstreet' murder, the disappearance of Milton Harris, Karl Sim’s Goldie forgeries and the William Sutch espionage trial. Mike Bungay died in 1993.

The “disappearance” of American tourist Milton Harris was one of NZ’s most bizarre insurance frauds. Barrister and QC Mike Bungay examines the case over two episodes, in his series exploring notable criminal investigations. This second part reveals how Harris staged his apparent loss at sea, the new life he built for himself in rural West Auckland and the way his tangled deception came undone (complete with a suspected parcel bomb and postal fraud). It also features an in-flight interview with Harris, shot during his trip home following deportation.

Thomas Robins has acted alongside digital penguins, dodgy teachers, and a ring forged in the fires of Mount Doom. Off-screen, his directing work has won a bag of awards, thanks to 2009's Reservoir Hill. He created the International Emmy-winning web series with David Stubbs, his partner at KHF Media. Robins was also behind TV series The Killian Curse, and directed 2017 telemovie Catching the Black Widow.