TVNZ’s Māori programme Koha talks to Billy T James in this studio interview. At 34, he is already one of NZ’s most prominent performers after a breakthrough role in Radio Times, two years of his own TV show and winning Entertainer of the Year. Topics include the unwitting role his teachers played in his mimicry, his brief career in commercial art, touring with the Maori Volcanics and whether his characters unfairly stereotype Māori. He also discusses why his humour doesn’t work with overseas audiences and recounts meeting a rather confused American. 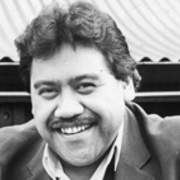 This Billy T Best Of includes his newsreader character