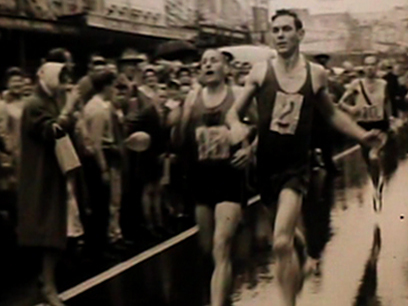 This excerpt from a 1962 edition of the National Film Unit's magazine film series features reigning Olympic 800m champion Peter Snell participating in a charity road race on Auckland streets. "Any one of 20 charities stands to make a hundred pounds as 20 roadsters hot-foot it around Auckland's Top o' the Town course." Roadsters also include Bill Baillie and Barry Magee. National hero Snell is in the bunch early on, but coming down a crowded and wet Karangahape Road he is of course, "the man to watch".

Once again Peter Snell has proved, he’s the man to watch!
– From the narration Snell is honoured by This Is Your Life A slower pace down K Road