In this interview at Auckland's Foundry nightclub, New Zealand's own rock'n'roll star Johnny Devlin discusses his career and latest musical projects. Talking to Top Half reporter John Hawkesby, he provides advice on making it in the music business, talks about his changing musical styles over the years, and reveals how he was affected by the death of his idol Elvis Presley. The interview concludes with a glimpse of the latest song Devlin has been working on, “I’m Heading for LA”, which was released to coincide with the 1984 Los Angeles Olympic Games.

I know that I was pretty upset for a couple af days. In fact I got so upset when it came to doing a tribute to him in Australia that I couldn't go on. So it was pretty devastating.
– Johnny Devlin, on dealing with the death of his idol Elvis Presley 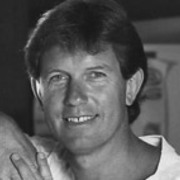 An earlier interview with Johnny Devlin

Interview with another legendary NZ rock'n'roller

A classic song from the 60s

A hit from Johnny Devlin's contemporaries A Kiwi singer in LA