In at the Deep End, by Peter Montgomery

Leading the Way, by Denis Harvey

In at the Deep End 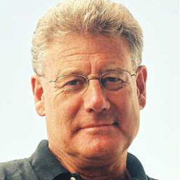 Sailing commentaries on both radio and television did not happen in New Zealand until the 1970s. Media coverage of sailing in New Zealand for most of the twentieth century was print only — newspapers and magazines. Sports commentaries on radio and television in the late 1960s were a closed shop, and covered the seasonal staples: rugby and cricket, a lot of horse racing, some rugby league, soccer and tennis. That was about it.

The OK Dinghy World Championships were being sailed in October 1970, out of Takapuna. This was the first major international sailing event held in New Zealand. There had been regattas with Australian and Kiwi sailors, but for the first time prominent sailors from Europe and Scandinavia were competing.

Broadcaster Bill McCarthy had a vision for some radio and TV coverage that would capitalise on the success of the Chris Bouzaid-skippered Rainbow ll winning the One Ton Cup in Germany. From a largely participant sport, devoid of meaningful media presence, had emerged a demand for greater coverage and information.

Local yachting commentary was unheard of; so where to find a commentator was the burning question. Discussing the predicament with some of his broadcasting colleagues, Bill McCarthy suggested he should approach his old school friend, Peter Montgomery. Bill knew I was crewing regularly on yachts in Auckland. But I said no to his flattering invitation and suggested several other names. Bill and I talked to at least 10 different people, but none were available.

Bill was desperate and asked if I could help out for the invitation weekend, then for the world championships to be sailed over Labour Weekend in 1970 he would get someone decent. I reluctantly agreed, with no instruction, nothing; just in at the deep end on Saturday 18 October 1970.

On that first day Bill told me "remember you are talking to a little old lady with a blue rinse hairdo — in Riverton." I have never forgotten that advice. Over 50 years later, the little old lady in Riverton is still my number one listener. Bill and his broadcasting colleagues were satisfied I was decent enough during the opening invitation weekend, and invited me to commentate the main championships.

A couple of months later I was invited to commentate the defence of the One Ton Cup. This had keelboats from several countries competing, including Europe. It was a much bigger regatta than the OK championships. For New Zealand sailing, it was a big deal. For the first time there was extensive coverage on TV, hosted by Bill McCarthy. In addition, the National Film Unit made a documentary,  The One Ton Cup 1971.

I was on radio with Roy McDell as my first expert analyst. We were broadcasting from Royal NZ Navy frigates serving two networks: ZB and the YC network's Sports Roundup.

The reaction was a surprise to broadcasting management, who quickly became aware of companies not on their radar, keen to be associated with sailing and advertising on both TV and radio. The reaction also alerted management to the role both TV and radio can have for a sport that is not a turnstile sport, played in a stadium. The numbers viewing or listening were much higher than expected.

Much of what has been achieved in the last five decades by New Zealand sailing can be traced back to Chris Bouzaid, and his winning team on Rainbow ll in Heligoland. The same day they won, Neil Armstrong walked on the moon. The next day The Auckland Star divided their front page into a right-hand side — ‘Man steps on Moon’, and the left-hand side — ‘Rainbow wins the One Ton Cup’.  The champion yachties returned to a motorcade welcome down Queen Street, and Bouzaid was named New Zealand Sportsman of the Year.

My start in broadcasting was a happy accident, with several stars aligning. Having no local predecessor, I had to work on presentation and style. Long before October 1970 I'd been fascinated and impressed by horse racing commentators — especially the colourful Australian callers. In the final 250 metres, they could say so much in so little time. The ability of the good callers to pull words out of the air to match their vocabulary to the occasion was, and still is, impressive.

Two other sports had a big influence on my broadcasting career: cricket and golf. New Zealanders Iain Gallaway and Alan Richards were world class. But not everyone can understand terms like silly mid on, covers, third man, and slips. Does slips refer to grandma's nightwear from the night before? Why are those men in white running back and forth, and the spectators talking a lot of incomprehensible jargon about hitting each other in the bails with a googly to the inside leg?

Even golf has its own language and jargon. Consider the meaning of a chip out of a bunker for a birdie. Right from the start, it was important to remain faithful to the expressions and language that sailors use; but also to keep in mind the little old lady in Riverton, to ensure she knew what we were talking about. Talking a new jargon, and trying to explain. Gybing, reaching, eased sheets before going hard on the wind and beating then tacking. Broad reach for sailors… is that a direction, or point of sailing?

It was during the 1971 One Ton Cup. DOC Williams — then a broadcasting colleague, later a producer of sports programmes — told me something I've never forgotten: "Every time you speak you should lose part of yourself". The message I took from that was if it's good enough for the audience to give up their time to tune in, it's good enough for broadcasters to be properly prepared. A broadcaster who doesn’t value audience loyalty should be in another line of work.

From the world championship in 1970 and the 1971 One Ton Cup when Bill McCarthy set the flame alight for me... Now, 50 years on, I've been privileged to report and commentate on the rise and rise of New Zealand sailing — at 13 America’s Cups, 10 Olympic Games, and all 13 Round the World Ocean Races. Plus many other events on the world stage of sailing: the Bermuda Gold Cup, the Swedish Match Cup, the Monsoon Cup, the Admiral's Cup and other significant regattas across the world.

Over those past five decades, sailing broadcasting — both live, and in documentaries — has become mainstream, and far from the novelty it was back in 1970. This has allowed others their own opportunities. For the last 25 years, New Zealanders have had key roles in prime time coverage of the events of the America’s Cup and the Ocean Race. Long may that continue.

"Do what you love and love what you do" — great advice I was once given. The time comes for all of us when it's someone else’s turn. "Do what you love", and the sage advice I got from Bill McCarthy and DOC Williams, are as relevant for future broadcasters who want to sail on, sailor.

As two islands in the southern Pacific, New Zealand’s history, commerce and lifestyle is inextricably linked to the sea. Our original discovery by voyagers from Polynesia and later Europe created the nation. Until the early 20th century, the only way to access Aotearoa was by water, and we're still dependent on shipping for much of our economy. So it's only natural that the sea plays such a dominant part in our lives.

It is only really since the 1970s that sailing has risen to become one of the premiere sporting pastimes, providing iconic moments and delivering some of New Zealand’s largest television audiences — driven by success on the water, and advances in broadcast technology that have brought that success to our screens.

At Olympic level, sailing is now our third most successful sport, beginning with Peter Mander and Jack Cropp winning our first gold medal in 1956. Successive Olympic champions like Bruce and Barbara Kendall, Russell Coutts, and Peter Burling and Blair Tuke have become household names. Live coverage of Olympic sailing really only began with the 1988 Olympics. Along with a talented team of other Kiwi production crew, I've now had the privilege of providing international host broadcast coverage of sailing at four of the last six Olympics — delivering images of our Olympic champions into New Zealand and around the world.

In keelboats New Zealand came to world and Kiwi attention with Chris Bouzaid winning the One Ton Cup in 1969 in Rainbow ll, and then again in 1972. New Zealanders have gone on to win many major blue riband [premium] events. This early success also brought Kiwi designers to the fore — with Bruce Farr and Laurie Davidson becoming household names with winning keelers, then moving on to design a number of New Zealand’s winning around the world yachts and America’s Cup winners.

Off the back of those early victories, and multiple World Match Racing and other pinnacle events, New Zealand had the confidence to launch challenges for the America’s Cup and Whitbread Around the World/ Volvo Ocean Race – events now dominated by New Zealand sailors that have given legendary status to the likes of Sir Peter Blake, Chris Dickson, Russell Coutts, Dean Barker, Grant Dalton, and more recently Peter Burling. Their exploits since Blake’s first Whitbread campaign for New Zealand in 1981, and that first America’s Cup attempt in Fremantle in 1987, have captivated Aotearoa, thanks to major advances in technology that have enabled live coverage for every America’s Cup since 1987 — and incredible images from the Southern Ocean in the Whitbread and the Volvo.

New Zealand has also led the way in coverage of these events as both a broadcaster, and as host broadcaster capturing the action. I've had the privilege of leading the TV production teams — with the majority of the production and technical crew being Kiwis — for six America’s Cups. Dunedin-based company Animation Research pioneered the use of real-time 3D animation that has revolutionised coverage of sailing, and made the sport understandable to a wider audience. It can be fairly said that the success of New Zealand on the water has been mirrored by the success of the Kiwi production sector, which is now recognised as the world leader in sailing coverage.

Outside of competitive sailing we have also looked back to understand our maritime history — documenting recreations of waka voyages with Kupe - Voyaging by the Stars and He Hekenga Tūhura - A Voyage of Discovery, and the exploration of our early history and connection with our coastline with the likes of the excellent Captains Log and Coast shows.

So there is much to enjoy in this collection. It offers the opportunity to reminisce and recall some of the glory days of New Zealand’s competitive sailing success — as well as understand where we have come from as a maritime nation.

Former TVNZ Head of Production Denis Harvey has produced sailing coverage at four Olympic Games and counting. His first involvement in television coverage of the America's Cup was in 1990.