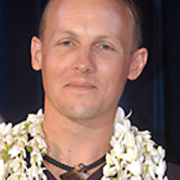 Dan Salmon has directed and produced projects across the gamut: documentary, docudrama, short film and commercials. Salmon first got serious about filmmaking while studying at Auckland University. Two pieces he directed in 1995 while completing a Diploma of Broadcast Communications — one on artist Michael Parekowhai — were broadcast by TVNZ. "So I came out of the course claiming I was a director, and a few people believed me."

Within a few years Salmon was gaining valuable experience as a field director on Cal Wilson-presented youth show The Drum. By 2003 he was making the finals of the 48 Hour Film Contest, and winning awards for TV show 2050: What if... Combining interviews with recreations, the three-parter made predictions as to how New Zealand might look if it variously became a state of Australia, went clean and green, or embraced Tino Rangatiratanga. What if... was judged New Zealand's Best Documentary in 2003, and Salmon voted best documentary director.

In 2005 he further cemented his directing credentials after helming one-off doco Made in Taiwan, and eight-parter New Zealand at Home. The latter series saw historian Douglas Lloyd Jenkins exploring the history and possible future of the country's houses. Made in Taiwan, meanwhile, proved a healthy seller overseas, and a double award-winner at an Oceania-wide documentary festival held in Tahiti. The documentary followed Naked Samoan Oscar Kightley and Māori radio/TV personality Nathan Rarere, as they traced their ancestry back to Taiwan, using DNA technology.

2010's Dirty Bloody Hippies was born after producer William Grieve approached Salmon with some priceless footage of the Kiwi countercultural movement in the early 70s. Keen to put his subjects neither "under the gun, or on a pedestal", Salmon got to work tracking down some of the survivors. Dirty Bloody Hippies played to full houses at NZ's Documentary Edge Festival.

The 2012 round of NZ Film Festivals saw the debut of a project Salmon spent a number of years assembling. The feature-length Pictures of Susan explores life for outsider artist Susan King, who stopped talking at the age of four and has said little since.

In 2014 he worked with co-director Claudia Pond Eyley on two-part TV3 documentary Helen Clark: The Road to Power. The project saw them interviewing everyone from John Key and Clark's husband Peter Davis to her proud, National Party-leaning father George; Salmon argued that the film attempts to "balance the political with the personal".

Salmon's other directing credits include dramatic shorts Licked (which played in the New Zealand Film Festival and at fests overseas) and The Day Morris Left (starring Rawiri Paratene), three episodes of settler series Here to Stay, 10-part food and culture show Vital Ingredients, post-Rogernomics doco Children of 1984, and How to Spot a Cult.

He has also produced a wide range of projects for others: from Qantas-winning euthanasia doco A Good Way to Die, to the music video for hit Bathe in the River, to Undergrowth, the directorial debut of Oscar-winning production designer Grant Major.