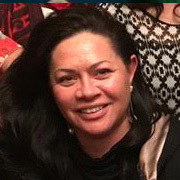 When Karen Te O Kahurangi Waaka-Tibble was a child, performing on stage was all in a day's work. Her parents ran concert party group The Rotorua International Māori Entertainers, based at the Rotorua International Hotel. All five kids were expected to pitch in. At age 16, Waaka-Tibble flew to Japan with members of her family to perform at a trade fair. "It was the beginning of traveling the world as an ambassador for Aotearoa.  My motto: have poi, will travel!"

There was little room to be shy in this family. Waaka-Tibble's mother was Maureen Kingi, a longtime Rotorua District Councillor, and former Miss New Zealand. Her grandfather, Kuru Waaka, had a longtime involvement in the Māori Arts movement, and was a founding director of the Māori Arts and Crafts Institute in Rotorua (now known as Te Puia). Her father John is a trustee at Whakarewarewa Village, who has hosted tourists from across Aotearoa.

After completing an arts degree at Waikato University, Waaka-Tibble returned to Rotorua to help manage the family's concert party business, and organise other tourism events, including kapa haka festivals and Rotorua's annual Opera in the Pā concert. She was also secretary of the Rūnanga Rangatahi o Te Arawa, before chairing the Māori Regional Tourism organisation for a decade.

She has also been involved in intellectual property work. She has chaired the Māori trademarks Advisory Committee of the NZ Intellectual Property office since 2003, and is a member of the Māori Advisory Committee dealing with patents. In mid 2018, she became the NZ Film Commission's first Pou Whakahaere (Senior Māori Executive), facilitating funding for Māori films and career development for Māori filmmakers.

At a family wedding in 2003, she met broadcaster Kōtuku Tibble. The following year she moved to Auckland to be with him, and began working in television. Tibble and his close friend, producer Quinton Hita, were talking about the TV show they were working on for Hita's new company Kura Productions. After Waaka-Tibble offered her advice, Hita offered her a job in 2005 finding talent for his te reo game show Kupuhuna.

After production managing Pūkoro, a children's show in te reo, Waaka-Tibble would go on to produce most of Kura's shows. While she'd never worked in television before, her experience with project management and Māori development proved she had the skills. As of 2018 she is Kura's General Manager/Tumu Whakarae.

Waaka-Tibble is proud to have made shows in te reo for Māori communities, although she notes "it’s tough working with way less money than mainstream, yet expecting the same if not higher results."

The mother of three has produced nine out of 10 seasons of Pūkoro for Māori Television, a series she enjoyed working on because "it's for our kids and mokos. It's colourful, fun and we can play and work alongside kōhanga reo kids, and advocates of te reo." Her other producer credits include beginners language show Tōku Reo, Māori Television comedy Only in Aotearoa and a suite of shows recording kaumatua around the country: Kōwhao Rau, Taniwha Rau, Matangi Rau and Huia Rau. Meanwhile Te Kati: The Goethe Mystery was selected to screen in Māori Television's 10 year celebrations. The documentary saw her husband travelling to Germany to investigate the history of his whānau.

In 2012 she was line producer on Quinton Hita's first feature, Mt Zion. She went on to produce Māui's Hook, which was invited to screen at the 2018 NZ International Film Festival. Mixing documentary and drama, the film follows a young man who encounters five families dealing with suicide. Directed by Paora Joseph, it was partly funded by Māori suicide prevention agency Te Rau Matatini.

"I always work on the premise of  'love what you do and do what you love',” says Waaka-Tibble. "I try to only do things that I'm passionate about. So everything I've worked on is something I believe in. I have a passion and commitment to being Māori and speaking Māori, and helping others to achieve that — something my husband Kōtuku and I had in common."