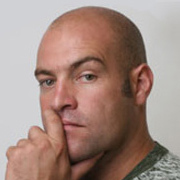 A fan of Monty Python, spontaneity and the laughter that can be mined from awkward silences, Leigh Hart began perfecting his deadpan screen persona as 'That Guy' on cult show SportsCafe. From 2002, after launching his own show, Moon TV, he began to be known for other roles as well: including a Dutch pet shop owner,  a dangerously fast cook, and the spokesperson for a brand of New Zealand bacon.

Born in Greymouth, Hart's childhood covered a lot of ground. His father Herb was a West Coast miner who was lucky to survive the 1967 Strongman mine explosion. He took up tunnelling instead; as a result, Leigh spent time in Hong Kong, Melbourne and a Peruvian village high in the Andes, before arriving in New Zealand around the age of 11. He finished school at Christ's College in Christchurch, where he began playing music and "got a taste for performing" — plus a caning record of 40 strokes in a single term, for "taking the piss in the classroom".

After a stint in England helping his father patch up holes in the Channel Tunnel, Hart returned home and began singing with band Wild Turkey. The group headed to the United Kingdom, where they were fired from a summer holiday camp, and thrown out of France for not having work permits.

Hart studied at Christchurch Film and TV School, and burnt the midnight oil on his own satirical newspaper, The Moon. The course taught him the importance of moving north if he was going to make it in television. After sending his CV to various production companies, he got a foot in the door with Greenstone Pictures producer John Harris. He did time as a runner, worked on research and programme proposals, and was a writer on early episodes of reality show The Zoo.

One evening in 1996, Marc Ellis turned up at his flat carrying a container of snails, desperately seeking a replacement guest for live panel show SportsCafe. Hart's flatmate wasn't interested. Hart stepped up to play an international snail trainer, in a mock interview. With SportsCafe's Cannonball character leaving the show, Hart was offered a weekly slot doing sports stories under the nickname That Guy. As he explains in this extended interview for TV show Funny As, he enjoyed injecting unpredictability into interviews, in a country where sports is often taken "very seriously".

In 2002 Hart proposed his own late night show to Sky Television, which screened SportsCafe. With roughly $6000 in sponsorship he made the first series of Moon TV, savouring the energy and freedom of "filming on the run" with a small team. Pretending to be its own station, the show parodied a range of TV shows, from reality TV to soap operas.

Later seasons saw a move to TVNZ, and road trips both local and global. Awkward, ridiculous interviews become Hart's stock-in-trade, amply demonstrated by two trademark sketches — a breakfast show parody where guests are treated badly and interrupted by fake infomercials (which spun off into Late Night Big Breakfast), and a book review slot where Hart fails to impress his former English teacher, writer Joe Bennett. Scenes of Alison Holst's kitchen being destroyed and Neil Finn being asked to perform songs written by his brother left some viewers unsure who was in on the joke. In 2005 and 2007 Moon TV was nominated for Best Comedy Programme at the NZ Screen Awards.

Scenes of Alison Holst's kitchen being destroyed and Neil Finn being asked to perform songs written by his brother left some viewers unsure who was in on the joke.

In 2010 Hart secured his biggest budget to date; Leigh Hart's Mysterious Planet travelled to Egypt, Bermuda and a UFO festival in Roswell. Hart described the show as an "epic TV disaster extravaganza" which took potshots at both the subject matter, and those TV shows which promised to show that Bigfoot existed after the commercial break. Hart ruffled some fur with US Sasquatch believers after making comedy out of a Bigfoot conference in Ohio, and telling believers that New Zealand had a sasquatch of its own.

Hart was an early Kiwi presence online. Working on low budgets, he retained ownership of a number of his projects. With homemade comical content exploding on the internet, his library of Moon TV clips has racked up millions of hits on YouTube. In 2016, worried about potentially having to wait two years to learn if he'd won NZ On Air funding for a second season of Late Night Big Breakfast, Hart moved the show to new online viewing platform WatchMe.

The show was presented by Hart and longtime partner in crime Jason Hoyte, who Hart had first enlisted for Moon TV sketch Speedo Cops. Impressed by Hoyte's ability to roll with whatever was thrown his way, Hart invited him onboard for 2012's Olympico and fishing show Screaming Reels. Matt Johnson (who once played with Hart in band Wild Turkey) and Jeremy Wells are also Hart regulars.

Hart and Hoyte won new fans through their drivetime slot on Radio Hauraki. They began at the station with a sports show spinning off the comical Alternative Commentary Collective. Writer Calum Henderson celebrated their distinctive mix "of chaos and comedy, fact and fiction". After Hoyte's departure, Hart left Hauraki in November 2019 to concentrate on launching online streaming platform, Moonflix.

Hart's production company Moon Media also makes commercials and corporate videos, including handling the Hellers campaign in which Hart gets passersby to sample the company's products.

Outside of his comedy work, Hart has also featured in episodes of DNA Detectives, Shock Treatment, and the Strongman Mine episode of Descent from Disaster. He talks about all three programmes in this interview.