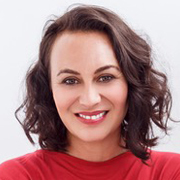 Academic and filmmaker Marina Alofagia McCartney earned acclaim for her 2012 short film Milk & Honey, which offered a Pasifika perspective on the infamous dawn raids of the 1970s. The part Samoan director made her first short film in 2010: Granda was about a young Samoan man connecting with his grandfather. The former Miss New Zealand was one of the directors on 2019 feature Vai, which was invited to several international film festivals — including Berlin and South by Southwest. The drama is set across the Pacific Islands, with eight stories each directed by a different woman.


I am a single mum to a five-year-old daughter and I was working a full-time job during Vai, which was also incredibly challenging and at times overwhelming. However, it made me realise not only what I am capable of, but what I can achieve in the future with my film career. Marina Alofagia McCartney on balancing film and family, Ministry for Pacific Peoples website, 22 April 2019