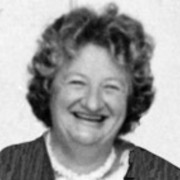 Dame Pat Evison's long screen career saw her sharing the screen with George Henare, future playwright Roger Hall and a young Mel Gibson. Evison worked extensively on both sides of the Tasman, including breakthrough Kiwi drama series Pukemanu and Close to Home, and a long-running role on Australia's The Flying Doctors. Evison passed away on 30 May 2010.

If you want to be remembered, you’re better not to be beautiful. Pat Evison, in a 28 March 1998 NZ Herald interview