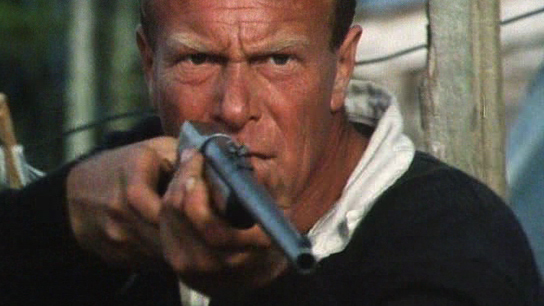 This feature tells the true story of the notorious 1941 manhunt for Stanley Graham. The West Coast farmer went bush after a shooting spree that followed police pressure to have him hand over his firearms. Seven men were ultimately killed. Written by Kiwi-born Andrew Brown (from Harold Willis’ book), Bad Blood was made during the tax break era for UK TV, but was released in NZ cinemas. Directed by Brit Mike Newell (Four Weddings and a Funeral), it won strong reviews. Aussie legend Jack Thompson and compatriot Carol Burns star as the isolated Bonnie and Clyde coasters.

Even the most beautiful New Zealand landscape is integrated as an almost active character. Newell’s exploitation of the night-time sequences adds a supernatural aura to Graham’s threat, which turns hunters into hunted and re-locates paranoia in the community at large; while his evocations of claustrophobia amidst open country prove well worthy of producer Andrew Brown’s intelligent screenplay.
– Paul Taylor, Time Out review

A 2006 film on another notorious NZ manhunt

A 1966 film on firearms safety

A more positive look at the isolation of West Coast life