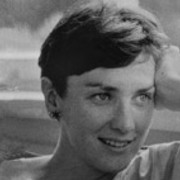 Shereen Maloney's screen work has ranged across drama, documentary, and personal films, in a variety of creative roles. Fascinated by stories of ordinary people, her early shorts Irene 59 and Doc were based around her parents. Later she wrote and directed mother/daughter tale Return Home for drama series About Face, and cross-cultural TV romance Mother Tongue. Maloney has also produced many documentaries.

Women came up to me afterwards with tears in their eyes and thanked me for making it. Their husbands were annoyed and embarrassed that they spoke to me, and hustled them away. Shereen Maloney, on her short film Irene 59