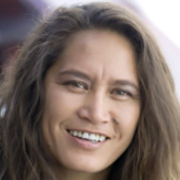 Tania Simon spent four years as co-host of Takatāpui, the world’s first television show aimed at indigenous gay, lesbian and transgender viewers. Her acting resume includes Shortland Street and the starring role in 1993 short Peach, opposite Lucy Lawless. Simon is also a longtime sign language interpreter who has interpreted on TV; in 2009 she directed documentary He Māori He Turi, about NZ’s 110,000 Māori deaf.

Tania’s reo is inspiring and she connects really well with the people she interviews, especially when she attends very personal events like unveilings or civil unions. Takatāpui producer Jude Anaru, in May 2006