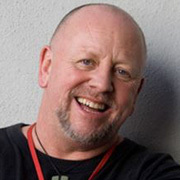 It's a real cliche to say it but there is a desire to laugh in this day and age. It's a cliche but I believe it. Willy de Wit in Rip It Up, November 1988