This 1946 film surveys New Zealand housing: from settler huts to Ernest Plischke’s modernist flats. Architect William Page bemoans sun-spurning Victorian slums with their unneeded “elaboration”. But more fretful than fretwork is a housing crisis that sees 26,000 families needing homes, with owning or renting out of reach of many. Michael Savage’s pioneering (but war-stalled) state housing scheme and newly-planned suburbs offer hope. Fed by wood and cement, NZ can build again with brio: “For a home is the basis of the simple things that make victory worthwhile.” 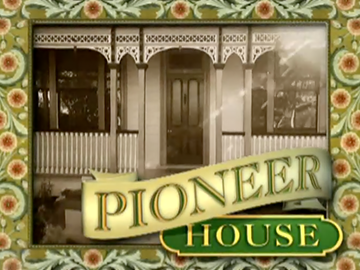 In this fascinating social experiment, a 21st century Kiwi family is transported back in time to live as a typical family would have — 100 years ago. Their house and garden is restored to its 1900 state with electrical fittings, modern plumbing and all traces of modern living removed. The family have to deal with the challenges of turn of the last century manners, dress, morals, work and a lack of conveniences (including a regular outside trip to the long drop toilet). Based on a UK format, the series was followed in New Zealand by Colonial House (2003). Famous as New Zealand television's first ever sitcom, Buck House was a rollicking and relatively risqué series that centred on the comings and goings of university students in a dilapidated Wellington flat — the eponymous 'Buck House'. Stars of the show included John Clarke, Paul Holmes, and Tony Barry (Goodbye Pork Pie). Despite (or more likely because of) its bawdy humour, occasional coarse language and alcohol abuse, the pioneering comedy sated the needs of many Kiwi viewers desperate for TV with identifiable local content and flavour.

Musician Petunia (Jennifer Ludlam) and daughters Polly and Patch are tiring of their lives as land yachting "gypsies of the motorway" in the first episode of this hyperactive children's fantasy drama written by Margaret Mahy. Their salvation could be a magic house owned by Crocodile Crosby — a used car dealer with ambitions to be a pirate — but a devious land agent (Michael Wilson) and a dastardly wealthy couple stand in the way. All powerful narrator Paul Holmes orchestrates the action which features extensive use of music and period video special effects. Toi Whakaari acting graduate Rachel House, ONZM, won her first theatre award in 1998, around the time she debuted on screen as co-star of short film Queenie and Pete. Since then she has shown her gift for comedy and drama in The Life and Times of Te Tutu, Whale Rider, and White Lies — and won new fans as a child welfare officer on a mission, in Hunt for the Wilderpeople. She was the voice of Moana's eccentric grandma in Disney hit Moana, and has been a panellist on Ask Your Auntie. House has also directed often for the stage: in 2012 she helmed a te reo version of Troilus and Cressida, at London's Globe Theatre.

"The season's old and the leaves have turned to gold / And the wind blows cold from the south ..." The song is mournful, dreamy and elegiac, and so is the music video, from Steve Young. The clip features amiably laidback performances by the band members, hanging out in various Dunedin locations — including synchronised guitar dancing (a la the Shadows) on a wintry-looking beach: grey clouds, pale blue sky and a charming "out now on Flying Nun" drawn in the sand as the closing shot. The orange $50 note in the busking bowl is a notable 80s relic.

Neil Finn formed Crowded House in 1985 with Melbourne musicians Paul Hester and Nick Seymour, after the end of Split Enz. In 1987 Finn-penned single ‘Don’t Dream It’s Over’ reached number two in the United States, helping overcome the disinterest of New Zealand radio. Third album Woodface (which included 'Weather with You') saw the United Kingdom become their largest market. In 1996 a weary Finn broke up Crowded House to go solo, only to revive it for two further albums after Paul Hester's death in March 2005.