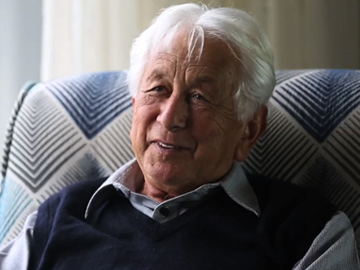 Vietnam veteran Thomas Brosnahan shares his time spent in the military in this Memories of Service Interview. He moved from the Territorial Forces to the army at 23 to join his two brothers, before heading off to the war in Southeast Asia. He would spend 20 years in military service across Malaysia, Singapore and Vietnam, including active duty in the capital, Saigon. As well as the Vietnam War itself, Brosnahan reflects on life after the war, particularly on the hostility vets faced from the public upon returning home, and the effects of agent orange on his former colleagues.

This documentary explores resurgent interest in Anzac Day and examines the Kiwi desire to “remember them” (those who served in war) — ranging from patriotism to protest to burgeoning dawn services. The doco is framed around the return of the Unknown Warrior to a Wellington tomb in 2004; and a trip to Trieste, Italy, for Gordon and Luciana Johnston and their 24-year-old granddaughter Kushla. Gordon was a World War II gunner and Luciana an Italian nurse. Kushla learns of their war experience, and the early Cold War stand-off in Trieste following Nazi surrender. In 1951, New Zealand temporarily became a police state. Civil liberties were curtailed, freedom of speech denied, and people could be imprisoned for providing food to those involved. This award-winning documentary tells the story of the 1951 lockout of waterside workers, and what followed: an extended nationwide strike, confrontation and censorship. There are interviews with many involved, from workers to journalists and police. At the 2002 NZ Television Awards, 1951 won awards for Best Documentary and Documentary Director (John Bates). Costa Botes backgrounds 1951 here. Written by Tom Scott and Greg McGee, South Pacific Pictures-produced Fallout was an award-winning two-part mini-series dramatising events leading up to NZ’s 80s anti-nuclear stand. PM Robert Muldoon (Ian Mune) calls a snap election when his MP Marilyn Waring crosses the floor on the ‘no nukes’ bill, but his gamble fails, and David Lange's Labour Party is elected. Lange (played by Australian actor Mark Mitchell) is pressured from all sides (including a bullish US administration) to take a firm stance on his anti-nuclear platform. He finally accepts there is no middle ground.