In late 1769 Captain James Cook first reached New Zealand, charged with charting the area. Peter Elliott follows Cook's journey in this award-winning four-part series. The first episode looks at Cook's first encounters with local Māori, on the east coast of the North Island. Some greeted Cook with pōwhiri; others took exception to the murder and kidnapping the Europeans brought despite their declarations of peace. Meanwhile in the third clip Elliott learns all about the P Class Yacht, and meets a young Tauranga sailor with blonde hair who bears a distinct resemblance to future America’s Cup skipper Peter Burling.

He was the ultimate really. What he was able to achieve way back then with the technology he had available just leaves me in awe.
– Royal NZ Navy Commander Clive Holmes, on Captain James Cook 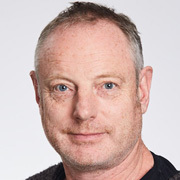 A documentary about a James Cook anchor A documentary about James Cook Drama set on the East Coast of the North Island Another documentary presented by Peter Elliott Peter Elliott acts in this drama