Fans of Fred Dagg have described this 1974 Country Calendar episode as the farmer's finest half-hour. Dagg's creator John Clarke felt the same way. Whether visiting the city or touring the farm, trailed by his family of identically-clad Trevors, Clarke adapts effortlessly to the relaxed approach of the long-running agricultural show. John Banas provides comedic support as the Trevor who can't fix a hose. Clarke took the mockumentary approach to new heights after moving to Australia, with The Games and his fake Clarke & Dawe interviews with Bryan Dawe. Read about Country Calendar's other beloved spoofs here.

It was one of the happiest experiences, and certainly one of the better expressions of the Fred Dagg ethos, because you got to tell the whole story.
– John Clarke, in 2006 documentary The Dagg Sea Scrolls 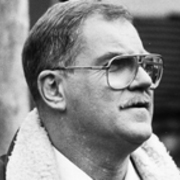 This iconic all-things-rural show is the longest...

Another visit to Fred Dagg's farm A brief tribute to Country Calendar Tributes and best of clips for John Clarke This 1974 primer on proper phone manner marks one of...