Director Leanne Pooley heads to a struggling Hawke's Bay farm as part of a documentary series made by newbie filmmakers. The Hallgarths are selling up after years of financial difficulty at their 600 acre sheep farm, which has been in the family for three generations. Pooley interviews a sad yet optimistic Arthur and Helen Hallgarth as they prepare to leave, and on the day they depart. Within a year of filming this show, the family returned to farming on a small property nearby. Pooley later directed Topp Twins:Untouchable Girls and 3D Mt Everest ascent saga Beyond the Edge.

When you're living on the land and working with the land you get to know it, and when you leave, it's like leaving a part of you, or leaving a close friend, but I think our family bond is strong enough to carry us through this.
– Helen Hallgarth, on selling their family farm 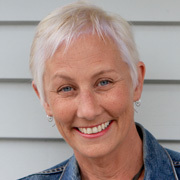