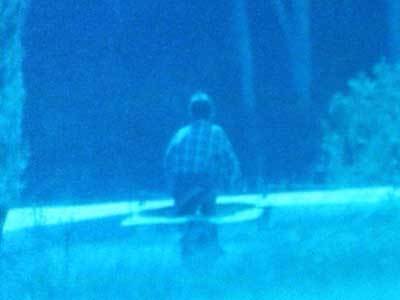 How can this be a documentary? That was the question some asked of director Tony Hiles when this whimsical film was shown at film festivals in the late 1980s and early 90s. Viewers are now more used to this type of ‘factional' film, but at the time of its release, Flight of Fancy defied accepted notions of documentary. It ‘starred' Michael Smither, Burton Silver, and Caroline Girdlestone, and for some viewers it seemed to be fictional. But was it?

Smither is well known in New Zealand as a painter and printmaker. His portraits of his children, and the landscapes of Back Beach amongst others, are important images in Aotearoa's art history. But Smither the conceptual artist is someone less familiar.

The project documented by Flight of Fancy is Smither's dream of flying. From observing fledglings and adult birds, he'd noted that baby birds learnt to fly with the gradual growth of their feathers: that as each new feather grew, it was lightly tested in the winds around the nest, and ‘learnt' by the bird. He proposed that the same approach — the building up and testing of ‘wings' (sails) — could enable him to fly.

When Smither presented this idea to Hiles, he saw its filmic potential. Hiles' only proviso was that the gravity-defying project began when the film crew arrived. And so began two two-week long shoots at Farewell Spit and Wharariki Beach at the windy north western tip of the South Island, and at Smither's home base at nearby Puponga.

Hiles enlisted the assistance of cartoonist Burton Silver, and animal wrangler Girdlestone (who later worked on Babe and Black Sheep). They help Smither develop and physically make the wings and sails that he would fly with. Each sail or wing is attached to his paint-covered boiler suit, and later tested on the beach. And there in the winds he becomes the excitable fledgling — giggling and leaping up and down with the joy that he will fly.

Flight of Fancy won the Special Jury Prize at the first and only New Zealand Adventure Film Festival in 1988, Best Cinematography for Ian Paul at the NZ Film and Television Awards in 1989, and was a New Zealand Representative at Parisian documentary festival Cinéma du Réel in 1991. Hiles would revisit his fascination with the urge to fly in his 1994 feature, Jack Brown Genius.

Another flight of fancy from director Tony Hiles A documentary on artist Michael Smither Another Kiwi tries some flying Includes Kiwis who do crazy things in the air

A dramatisation of Richard Pearse's life and first flight A character attempts to fly in this kids' series The art of velvet painting A profile of artist Julia Morison