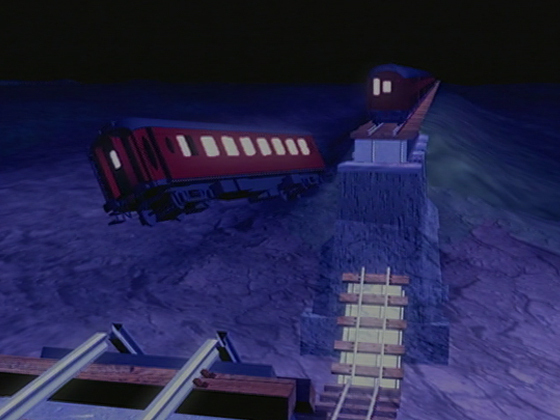 On Christmas Eve 1953 a volcanic eruption caused a massive lahar to flow down Whangaehu River. The Wellington-Auckland express crossed the rail bridge at Tangiwai minutes later; it collapsed, and carriages plunged into the flooded river. Out of 285 people, 151 died, in New Zealand's worst rail accident. This 2002 documentary examines events and the board of inquiry finding that the accident was an act of God. This excerpt attacks the story that Cyril Ellis could have warned the train driver what lay ahead, and argues there was a railways department cover-up at the board of inquiry.

When a big lahar hits, this embankment acts as a dam, trapping water and debris. And to make matters worse, the bridge crosses the river on a sharp bend at the far end of the flood plain.
– Narrator Paul Gittins on the placement of the bridge at Tangiwai The eruption that caused the lahar A dramatisation of the Tangiwai story

Marcus Lush visits the site of another NZ rail disaster Another train documentary from David Sims A journey along the main trunk line A location close to Tangiwai Another train tale, from the same director The Queen was touring NZ at the time Documentary on the Wahine disaster <!-- Start NZ On Screen - The Truth about Tangiwai - Badge --> <a href="https://www.nzonscreen.com/title/the-truth-about-the-tangiwai-rail-disaster" > <img src="https://www.nzonscreen.com/content/badges/the-truth-about-the-tangiwai-rail-disaster.horizontal-badge.jpg" width="330" height="90" alt="The Truth about Tangiwai " /></a>