Valley of the Stereos is a comic face-off that starts tinny, but gleefully escalates to bass heavy, as a not-so-zen hippy (Danny Mulheron) gets caught up in a vale-blasting battle with the noisy bogan next door (Murray Keane). Made by many key Peter Jackson collaborators, the near-wordless pump up the volume tale was directed by George Port, shortly before he became founding member of Jackson's famed effects-house Weta Digital. Ironically Weta's computer-generated miracles would help render the stop motion imagery seen in the finale largely a thing of the past.

The magpie seemed to get a taste for human flesh and several times attacked cast and crew, usually aiming for men's private parts.
– Director George Port on how the shoot turned into The Birds 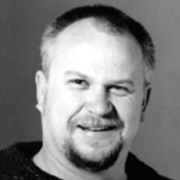 Tandi Wright talks about this show