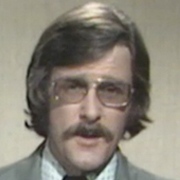 Derek Payne got his television break in 1968, presenting Dunedin magazine show Town and Around — and later its replacement, The South Tonight. He wrote and starred in early sketch series Something to Look Forward to, and contributed to hit variety show Radio Times. In the 1980s Payne moved into advertising. His 40 year acting career includes soap Radio Waves, drama Street Legal and acclaimed comedy Hounds.

I always enjoyed the field trips around Otago, covering towns likes Alexandra and Cromwell ... Of course there was no email then, and a show like Town and Around was really a big community information system. Derek Payne on his time as a roving reporter for 1960s magazine show Town and Around