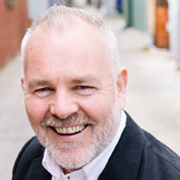 Writer and producer Paul Horan is Wellington-born, but Palmerston North raised. His father ran a pharmacy in the city's central square, and Horan attributes some of his success in dealing with performers to his dad’s approach. "All the old ladies liked to talk to ‘nice Mr Horan’. He told me ‘I might be the only person they talk to all week’. Dad taught me that totally focussing on these people was very important. He would chat for a couple of minutes, then went back to work”.

Paul was the third child of six. He attended Catholic high school St Peter’s. Although always a ‘performer’, drawn to debating or public speaking, he quickly came to prefer writing comedy. In the sixth form his team came third in the Spot On film contest, with a comedy about vacuum cleaners. In his final year of college he found a new creative outlet, joining Jeremy Corbett to DJ occasionally on Radio Massey.

For Horan, Massey University in the 1980s was entering the last of its golden days. Tuition was paid for, "lecturers had to beg students to attend classes", and there was a hotbed of comic talent. Horan met Paul Yates, Jon Bridges and David Downs, who would all go on to television careers. With Jeremy and Nigel Corbett they formed the group Facial DBX, after writing for the annual capping revue. Lacking road maps to being a local comedian, they took inspiration from the DIY ethos of TV comedians Funny Business.

In 1988 Facial DBX hired a van, packed a tent and took their sketch show on a series of orientation gigs. The crowds were bemused but supportive, but Horan was hooked. "I thought 'this is fun! We could do more of this'." As he says in this Xinterview for TV series Funny As, "there was no sense of a career. We wanted it to be,but Facial DBX was a lark. Then it became a possibility."

Facial DBX toured several times more, but by the early 90s the group had run its course. All headed to Auckland, with vague ideas of starting a venue. Horan was asked to join the writing team for political sketch show More Issues (1991-1992), where some veteran members of the writing team eyed this young buck warily. Horan didn’t mind; he was too busy taking notes. “More Issues was my film school. Because I wasn’t getting my stuff onto the show I would wander around the studios, chat with the makeup people and give them a hand."

Horan was a talent scout for late night comedy quest A Bit After Ten (1993), flying around New Zealand and auditioning newbie comedians like Cal Wilson and Ewen Gilmour.

Around this time Scott Blanks joined Horan and some of his Facial DBX colleagues, to launch regular comedy performances at Kitty O’Brien’s. The pub became the cradle of an emerging Auckland comedy scene. But Horan’s days as a performer ended here; his organisational skills were coming to the fore — which included launching the first New Zealand Comedy Festival at the Watershed Theatre, with Margi Melsop.

At the start of 1999 Horan was invited to write material for the second series of character comedy The Topp Twins. He enjoyed developing new Topp Twin characters like ‘bowling ladies’ Mavis and Lorna, and travelled with the Topps to provincial gigs, witnessing the effect their act had on heartland New Zealand. "You’d see Northland farmers give standing ovations, singing 'Untouchable Girls'. Just amazing”.

A few weeks before the millennium Mike Mizrahi rang Horan and asked him to whip up "a script about the history of the world" for televised outdoor extravaganza This Is It (1999). “That show had everything: Douglas Wright doing the birth of Christ, Rangitoto exploding, Newton’s First Law, and the newly minted Prime Minister Helen Clark. It was the best fun.”

During the 90s Horan was often travelling, forging relationships with other international festivals. Melbourne was a frequent destination. In 2000 he was invited to Melbourne to script edit high profile Australian show Rove, which was switching channels. He helped set up the creative team, and worked with host Rove McManus on his distinctive monologues. The job opened Horan’s eyes to the possibilities of television. Rove was combining current affairs, comedy and entertainment in a fresh way that Horan feels would have been too expensive to pull off in New Zealand.

By 2003 Horan had decided to relocate to Melbourne, not predicting the kind of trans-Tasman career he would later enjoy. "I left thinking maybe New Zealand would cut me off, and occasionally still worry that's the case".

Horan’s combination of creative and production skills has translated into a stream of high profile Australian television work. He was series producer for Real Stories (featuring comedy duo Hamish and Andy), and in 2009 was asked to launch and be series producer on The 7PM Project. Again it combined entertainment and news in a live prime time slot. The same year Horan formed his own company, Slightly Uncomfortable Productions, specialising in developing hybrid news and comedy formats. In 2014 TVNZ hired Horan as a consultant for new show Seven Sharp. But he also loves being in TV3's control room as his old friend Jon Bridges puts the Kiwi version of The Project to air.

Horan still keeps his hand in with live performances, having directed twelve shows for the Adelaide and Melbourne International Comedy Festivals.  Since 2012 he has produced a run of high profile TV productions for the ABC, including New Year's Eve specials and Friday Night Crack Up. He was also series producer for prime time news satire show The Weekly with Charlie Pickering.

In 2016 Horan was asked by the ABC to consult with emerging indigenous Australians making television and digital projects. After asking why he was chosen, he was told "you’re a New Zealander — you’re not scared of brown people". Horan sees young indigenous talents as a potent source of good stories. “So many people want to be in television. But you’ve got to have a point of view to tell good stories. Indigenous people have something urgent and great to say, and it's great giving a hand."

"There are some white guys in TV, aged post 45, who seem furious at what’s going on. But things are better now. I say enjoy the chaos. Being a gatekeeper is bullshit.” Back in Aotearoa, Horan was consultant producer for both seasons of Madeleine Sami’s multi-character comedy Super City, and a script consultant and occasional post-production director for David Farrier's Netflix series Dark Tourist. He was excited about his involvement in the second season of Coco Solid’s "extraordinary" animated series Aroha Bridge.

Horan's big project for 2019 was producing series Funny As: The Story of New Zealand Comedy (and writing a tie-in book, with Philip Matthews). Horan interviewed more than 100 people for the show. The spur for the project was the death of legendary comedian John Clarke. Clarke holds a special place in Horan's heart  — not only thanks to his "precise use of language", but because Clarke's dad ran a McKenzie's store back in Palmerston North, not far from the Horan's pharmacy.

“My dad used to call his father ‘old Mr Clarke’. When I was working at the ABC and John was wandering around, I’d say 'oh look! It’s old Mr Clarke, how are you?’. Making John Clarke laugh was always a thrill.”