Seventeen-year-old Timothy (Dean O'Gorman, from the remake of Goodbye Pork Pie) is facing suspension after a misguided prank. His parents hope the French-Canadian exchange student they’re hosting will settle Tim down, but when ‘Michel’ turns out to be ‘Michelle’ — and spunky — plans go awry. Romance and cross-cultural comedy ensues as Tim tries to court his Montreal mademoiselle. Shot around Avondale College, the award-winning Kiwi-Canadian film got a special mention from the Children’s Jury at the 1996 Berlin Film Festival. The cast includes Angela Bloomfield and future Pluto singer Milan Borich.

She has legs for Africa and a body of an Amazonian princess. Oh and that face ... how could you describe it? Sort of Julia Roberts meets Winona Ryder...meets God.
– Nathan (Milan Borich) describes Tim’s new house guest 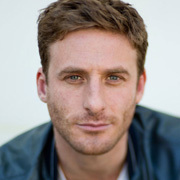 Dean O’Gorman also stars in this Actor Angela Bloomfield is a guest on this

An award-winning coming of age short Dean O'Gorman also acted in this