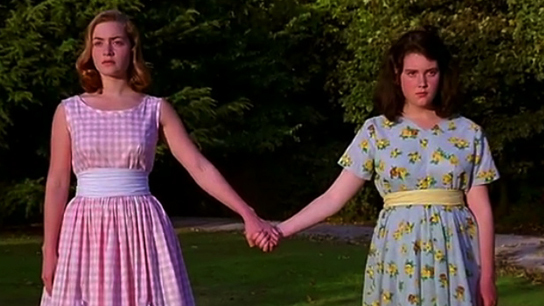 Peter Jackson's fourth feature is acknowledged as a radical departure for the director best known — and beloved — for his entertaining tales of splatter and satire (Bad Taste, Meet The Feebles and Braindead). Heavenly Creatures stepped up to the level of serious drama, and proved Jackson was a versatile director who could switch from bad taste to the arthouse with aplomb.

It was the film that catapulted him into the mainstream, winning a prestigious Silver Lion at the Venice Film Festival, and gaining an Academy Award nomination for best screenplay, which Jackson co-wrote with real life partner Fran Walsh. It was Walsh, intrigued by the story since puberty, who proposed to Jackson a movie based on the real life friends who had engaged in matricide.

Walsh and Jackson were not alone in wanting to make a movie about Pauline Parker, Juliet Hulme, and the tragic death of Honorah Parker. Australian Louis Nowra (Map of the Human Heart) had written a script back in 1987. Other projects involved writer Michelanne Forster (working from her 1991 play Daughters of Heaven), Brit novelist Angela Carter, Fiona Samuel and director Niki Caro, producer Robin Laing, and actor Dustin Hoffman.

Heavenly Creatures marked the first venture into digital effects for Jackson, a longtime lover of special effects. While collaborators Richard Taylor and Tania Rodger concentrated most on the unusual fake-plasticine suits worn by the imaginary inhabitants of Borovnia, George Port spent seven months conjuring images from computers that had limited storage, and ironing out bugs from some of the first equipment available on the open market. Port’s work ranges from hillsides which morph in the girls' minds into magical gardens, to making the Hulme house more historically accurate.

The combined work of the effects team was grouped under a new title, Weta Ltd (later split into Weta Digital, and Taylor's Weta Workshop). The aplomb with which the elaborate fantasy sequences were created proved a startling calling card for the newly formed effects company. Talents that were showcased on a large scale in The Frighteners, Jackson's first Hollywood studio film.

More than 30 American critics named Heavenly Creatures one of the 10 best films of the year, along with The Guardian's Derek Malcolm and the Sydney Morning Herald, who found it the best movie of 1995. Though not a global box office success on the order of Once Were Warriors, the rest of the world — particularly the Brits — fell in love with Jackson's exhilarating and sensitive retelling of a tabloid murder. Kate Winslet's performance as Juliet launched her stellar career, and Melanie Lynskey began acting stateside a few years later.

David Rooney's review from US entertainment industry magazine Variety is typical of critics' responses: "it combines original vision, a drop-dead command of the medium and a successful marriage between a dazzling, kinetic techno-show and a complex, credible portrait of the out-of-control relationship between the crime's two schoolgirl perpetrators."

In other words, Heavenly Creatures looks distinctive and gorgeous — aided by invigorating cinematography from Alun Bollinger — but it also has substance. The characters of Juliet and Pauline (Lynskey) are written and played with such sympathy and intelligence that the two girls are never turned into monsters, despite the atrocious crime they commit.

The context for the matricide — conservative 1950s Christchurch — is constructed in convincing detail, capturing the second-hand England pretence and fusty conformity of the world that the girls' imagination takes flight from. The audience buys Jackson's vision of a grand passion gone awry, and is left with a rich understanding of how the girls spiralled towards such a devastating final act.

Sadly Jackson's close friend and producer, Jim Booth, passed away after filming; Heavenly Creatures is dedicated in his memory.

- Bianca Zander is a journalist, radio producer, novelist and scriptwriter who teaches Creative Writing at Auckland University of Technology. This collection celebrates the best of 1990s television,... Peter Jackson wins an award for this film

The opening of Heavenly Creatures comes from this film

Behind the scenes of Heavenly Creatures’ special effects

Melanie Lynksey also starred in this Melanie Lynskey cameos in this short The follow-up film for Peter Jackson

Another feature film shot in Christchurch Another type of 50s murder house Composer Peter Dasent used to be in this band