In this documentary, poet Sam Hunt and raconteur Gary McCormick shake out the ache of descending middle age and hit the road for an old fashioned ‘rock and roll style’ poetry tour. Starting in Invercargill, the longtime mates make their way up the length of the country, sharing stories, anecdotes and of course, poems along the way. Here are two people's poets, one arguably great, the other certainly good, captured in full flight during their prime. The Roaring Forties Tour was nominated for NZ Film and Television Awards in 1996, for its editing and music.

My grandfather used to tell me AE Housman poems and go to the Hokonui Hotel heading for the pub down a country road, and old Harry Bosworth, my grandfather, was peddling his bike and I was walking along beside him, or trotting. He loved poems, he had a great memory for poems and he said "I'll tell you a poem. I'll tell it to you once and see if you can remember it". And he told me that poem. I gave it back to him first go.
– Sam Hunt 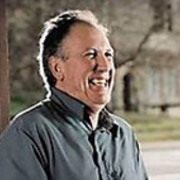 An earlier tour by the duo

A documentary about Sam Hunt