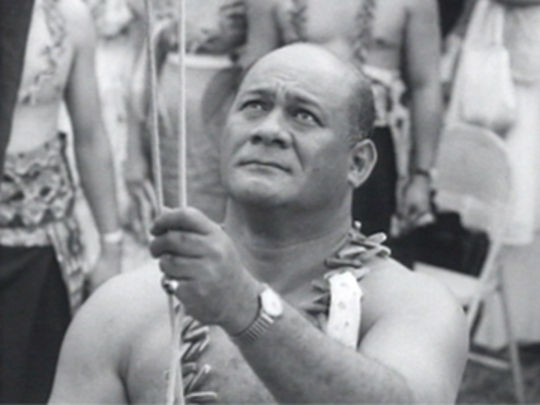 There is a rich history of the tuākana-teina* relationship between Pacific peoples and Māori in Aotearoa. Often in the early days of TVNZ’s Māori and Pacific Programmes Department, that relationship was the source of humour between Tagata Pasifika and the new Māori shows of the time — Waka Huia, Koha and Te Karere. It reflected friendly banter about who were the elders — Pacific people or Māori (yes, we know Māori are Pacific people). One thing is for sure — despite our differences, we are all Pacific people in the largest Pacific nation in the region, and the great Moana Nui a Kiwa is the cradle of the tuākana.

The snapshot of Pacific people in this NZ On Screen Pacific Collection draws a magnificent picture of our television and film history, and our relationships in Aotearoa and the South Pacific.

Our close tuakana-teina relationship is recorded in what may be the first of its kind — for New Zealand television — in Pacific Viewpoint. Look at it and marvel how, in a very Pākehā world, Māori and Pacific recognised themselves in just one television show.

A romantic view of the Pacific is dashed by the record of struggle for independence of many Pacific nations, and for a nuclear-free Pacific. In the treasure trove of music videos — from King Kapisi’s 'Screems from da Old Plantation' to Herbs’ 'French Letter' — you will hear our stories and history from our Pacific perspectives.

Our entangled islands, particularly those realm countries —Pacific countries within the realm of New Zealand, who are New Zealand citizens — tell a fascinating story of change, some of it heartrending. Atoll People documents how half the population of Tokelau was resettled in Aotearoa in the 1960s. Inquiry - Niue: A Cautious Colony Comes of Age sheds light on what is a continuing problem, depopulation of the Rock of Polynesia for the bright lights of New Zealand.

Other Pacific nations were gaining back their sovereignty, like Samoan Independence from 1962. Others remain to this day tightly bound to Aotearoa, like the Cook Islands captured in 1960 in Drums Across the Lagoon.

As the Māori renaissance grew from the 1980s onwards, so did a Pacific one. For Pacific people, the political awakening had its roots in the Polynesian Panthers movement of the 1970s where Pacific youth protested about the appalling and divisive Dawn Raids, youth unemployment and nuclear testing in the Pacific. In broadcasting, the saying from the disability sector —“nothing about us without us” — could be applied to Pacific people, as attitudes changed to “who is telling whose story?” In this background of turmoil and political awakening, Tagata Pasifika replaced See Here (a daily, Pacific-focused five minute studio show).

Tagata Pasifika was one of the founding shows of the Māori Programmes Department, under the stewardship of the late Ernie Leonard and the late Whai Ngata. Tagata Pasifika started (along with Waka Huia) in April 1987, and continues to this day. Here you will find a selection from the series, from its first programme with Foufou Susana Hukui and Reverend Maligi Evile, to some of the specials over the years.

In 1979, Albert Wendt’s seminal Sons for the Return Home marked a step forward, even though Pacific filmmakers had yet to take command of their own stories. In the 1990s, Tagata Pasifika began a series of writing workshops which helped develop a new generation of Pacific filmmakers — and led to the Tala Pasifika series of short dramas. It was produced by the late Don Selwyn and Ruth Kaupua from He Taonga Films. This century, Stallone Vaiaoga-Ioasa’s self-funded and successful feature Three Wise Cousins broke new ground and expectations. And across the Pacific, Vai expresses the power of Pasifika women, bringing strong new perspectives to the big screen. This wave of new filmmakers speaks of cultural confidence unimagined in the 1970s, when we first recognised ourselves on screen.

By the 1980s, Pacific communities were well settled in Aotearoa. Using the church as their anchor point, new generations of Pacific people straddled both cultures. A good example of our communities at that time was the charming and nostalgia-filled 1982 documentary New Streets - Auckland Fa’a Samoa.

Drama continued on one hand while Pacific comedy questioned racism and cultural norms with the unforgettable Naked Samoans, who morphed into bro’ Town. Many bro’ Town expressions entered the lexicon — Morningside for Life!

Pasifika youth, growing exponentially in the suburbs to become today’s leaders, had limited opportunities on the small screen. But they captured the hearts of the country with their talents in cultural expression in Auckland’s Polyfest, aka the Auckland Secondary Schools Māori and Pacific Performing Arts Festival. During the 1990s, the contestable funding model for New Zealand broadcasting enabled Pacific Beat Street from Drum Productions to hit the screens for many seasons. What is remarkable was that Pacific Beat Street was commissioned by TV3 and not TVNZ.

Later, spinning out of Tagata Pasifika, Fresh hit the screens in 2011 with self-deprecating humour entirely aimed at Pacific youth, but which resonated hugely with New Zealand youth and caught the global digital wave. Led by Lisa Taouma and her team, digital portal The Coconet became one of the most successful digital platforms in the country.

The Pacific communities in Aotearoa are extremely diverse. Tagata Pasifka’s role over the last 30 plus years has been to reflect those communities on screen in regular programming, as well as in specials like Ngaire Fuata’s moving Salat se Rotuma - Passage to Rotuma (2011). Up until this time very little footage existed of this remote Polynesian outlier lost in the Fiji group. Tagata Pasifika has also changed with the digital times, serving up news live on to the TP+ website, along with digital-only material. Since 1989, Pacific television endeavour, including the rich vein of Pacific music videos, has been made possible with the solid support of NZ On Air — Fa’afetai tele lava!

So as we navigate our way in the digital world, we are now able to recognise ourselves as tuākana in the great Moana Nui a Kiwa.

—Taualeo’o Stephen Stehlin has worked on Tagata Pasifika almost since it began. In 2008 he was made a member of the New Zealand Order of Merit, for services to Pacific Island television and the arts.