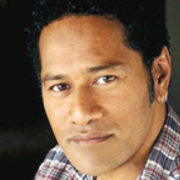 Jay Laga’aia hates to be pigeonholed. In a 2007 interview with American author Magdalena Ball, he spoke of wearing many different hats, “because they help feed my children.”

Laga’aia grew up in South Auckland and Ponsonby, to Samoan parents. His family were musically-inclined. As a teenager he toured in bands, then got an early job as a council worker, teaching street kids to play musical instruments. Laga’aia considered becoming an athlete, but instead got hooked into the “drug” of acting.

Having won a throwaway role in a stage musical, he recalls sitting like a pack rat in a corner of a rehearsal hall, “envious of friends of mine with beautiful booming voices, while mine was like a straggled balloon. Then I slowly began shaping the Jay Laga’aia that’s sitting here”.

After a television crew documented the street kids project, Laga’aia won his TV debut, acting alongside Michael Hurst as a wannabe pop star in 1984 series Heroes. He was one of the hosts of children’s perennial Spot On, played a horse-trainer in three episodes of The New Adventures of the Black Stallion and had small roles in Gloss, and 1988’s The Navigator. He also co-hosted a breakfast show on Radio Aotearoa, with Temuera Morrison.

Though Laga'aia displayed his talent for comedy on 1989 sketch show Laughinz, many of his early roles involved playing thugs and villains; his occasional appearances as the charming “yet dangerous” Draco on Xena: Warrior Princess won him a fan following. Laga’aia made his Xena debut opposite Lucy Lawless in the show’s debut episode; the two had already worked together on TV’s Marlin Bay.

Lag’aia’s career switched gear in 1996. That year he signed up for three years on long-running Australian series Water Rats - playing Tommy Tavita, the head of a police boat crew. The role brought Laga’aia into the media limelight, helping win a long run of roles in Australian television, including guest roles in Oz staples All Saints and McLeod’s Daughters.

In 2000 Laga’aia returned to New Zealand screens to star in Street Legal, which saw him nominated for NZ TV best actor awards in 2002 and 2003. Centered on a struggling law firm in Ponsonby, the successful show featured maverick Samoan lawyer David Silesi (Laga’aia), his legal partner (Kathleen Kennard) and a police detective (Charles Mesure). The show’s creators choose a Samoan central character partly as a means to reflect Ponsonby’s lesser-known history as an inner city refuge for Pacific Islanders.

Laga’aia was winning another kind of fame thanks to his starring role in the stage production of The Lion King, and short appearances as Natalie Portman’s bodyguard in the second and third Star Wars prequels - the latter proving the kind of fame that would earn him his own action figure, plus invitations to science fiction conventions. (Laga’aia talks about his Star Wars experiences on this episode of The Tem Show).

In recent years Laga’aia has continued to work largely in Australia, including Logie-nominated mini-series Bed of Roses, an ongoing role on Home and Away (playing a Brazilian minister), and Australian-shot vampire movie Daybreakers. In 2008 he returned to New Zealand - and to Xena producer Rob Tapert - playing a good guy guard on fantasy series Legend of the Seeker.

Laga’aia has also been a long-time presenter on the Australian version of Play School, one of a number of children’s shows he has worked on for the Australian Broadcasting Corporation. In 2007 the father of seven combined his experience in children’s TV and music (including contributing a song to the Water Rats soundtrack) by releasing family CD Come Dance and Sing. Laga’aia wrote, arranged, and played many of the instruments.

He spoke of having observed a huge hole in pre-school entertainment. “I think it is down to being a Polynesian, and coming from people who have always spoken their stories in a way which was inclusive of all people listening. A lot of the shows that I’ve seen are not inclusive. They forget about the people that have brought the children, or about that poor seven year old that got dragged along. I want to make music and shows that include the adults and older children as well.”