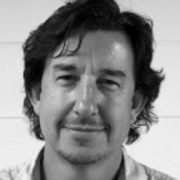 I was immediately drawn to the potential of the story as a film, because it touched on so many human emotions: despair, hope, light and darkness. Steven O’Meagher, on Out of the Blue