This collaboration between dancer Douglas Wright and director Gregor Nicholas was one of a series of music and movement-based shorts that established Nicholas’ reputation. A dramatised film noir sequence leads to a cross-dressing dance duel between Wright and Debbie McCulloch, shifting between an Orwellian cityscape and retro nightclub. Wright choreographs the bodies, and Nicholas the bold and sensual visual rhythms (shot by Stuart Dryburgh). Nicholas went on to direct high profile commercials and movie Broken English. Wright passed away in 2018. 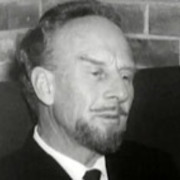 Kiwi-born Samoan Nathaniel Lees began acting on stage in 1975, and on screen in 1984. Since then he has become a leading force in the development of Pacific Island theatre in Aotearoa, and brought his distinctive baritone voice to everything from The Billy T James Show  to The Matrix.

Michael Scott-Smith’s four decade career as a producer/director spanned everything from Compass and Close to Home to Crime Watch. In the 1970s he helped open the doors of television to many of the decade's emerging independent filmmakers. As head of drama for TV1, he oversaw a rush of new production — before stints in information programmes, and back at the production coal face.