Twelve months down the track I received a cheque for three dollars saying they accepted my cartoon...at that point I nearly gave up, I found the three dollars more depressing than the rejection slips.
– Cartoonist Peter Bromhead on his first published cartoon, after many rejections

We blew it. Basically we're the same as any other country now.
– Legendary cartoonist Murray Ball on the legacy of 1984 Labour Government policies

I have no abilities as an artist...
– Burton Silver, creator of long-running cartoon Bogor, assesses his talents

If you're not drawing blood then you're underachieving. The best cartoonists are the ones that make you bleed or make you cry.
– Murray Ball on what makes a great cartoonist

We've seen in our lifetimes incredible change in human behaviour, in the way people dress and the way they present themselves. And to me that is connected with fashion...that's why I think fashion is an incredibly serious subject.
– Columnist and cartoonist Rosemary McLeod on using fashion and social change as cartoon topics

There's nobody really sticking their neck out anymore...there's no big court cases, there's no people in tears...
– Scabrous cartoonist Trace Hodgson on the state of Kiwi cartooning in the early 2000s

A well known, white, middle-aged political cartoonist once told me that I should strive to be the Billy T James of cartooning. I took umbrage at that. I'm not an entertainer.
– Cartoonist Anthony Ellison recalls a maddening moment in his career

A history of Kiwi screen animation Tom Scott also wrote this drama on the 1981 tour 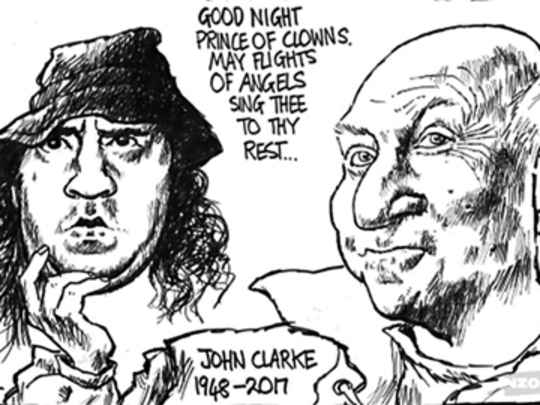 A cartoon by Tom Scott